Hurricane Lane remains a powerful 150mph storm, and is now within striking distance of the Hawaiian islands. Hurricane Watches have been raised this morning for Hawai’i through to Lana’i and Moloka’i, with Oahu possibly following suit later today or tomorrow. According to some computer models, Lane could still be a Category 3 hurricane near the Big island later this week, and hurricane conditions are possible on all islands as it stands today.

Lane is the second major storm to exist in the area after Hector two weeks ago, but a weakness in the high pressure ridge is allowing Lane to have a shot at Hawaii before being dragged further west over the weekend or next week. 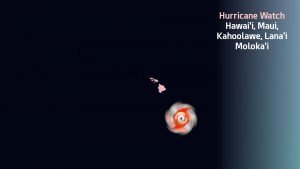