Typhoon Yutu bears down on Luzon 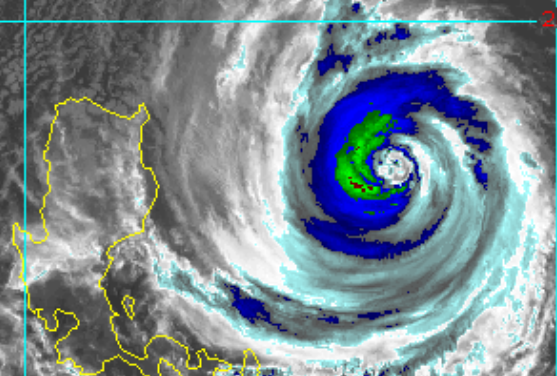 CONNECTICUT (F13) Typhoon Yutu, or Rosita for the Philippines continues its approach towards Luzon and is a life threatening situation. As of 6pm UTC Yutu remains an extremely dangerous storm with maximum winds of 120mph and a minimum pressure of 944mb, the equivalent to a category three storm, with potential intensification possible before landfall occurs.

Yutu has moved south of what was forecast at the time of the publishing of my last article, and is almost certain to make a landfall on the Philippines rather than cross just north of the archipelago nation. The Filipino government has already issued signal one warnings for large portions of the northern region of Luzon, and heightened warnings are very likely to be issued in the coming day.

The typhoon is expected to cross over the largest Philippine island in less than one day, bringing life threatening rain, winds and storm surge. Unfortunately, the same region that is being impacted by Yutu in the coming day is the same area that was devastated last month by Super Typhoon Mangkhut, which made landfall in Luzon as a category 5 storm.

To protect its people from potential harm in another natural disaster, the Filipino government is already taking action. In Cagayan, governer Manuel Mamba led a pre-disaster risk assessment where he told officials to evacuate residents in prone locations by the end of Monday, October 29th. He also suspended classes of all levels for the whole province on Monday and order disaster response teams to prepare to respond to the storm. Preparations like the ones in Cagayan are being issued across all of the Northern Philippines as gale force winds and heavy rain are expected to spread several hundred kilometers away from the center of the storm.

Elsewhere, Southern China and Taiwan are closely monitoring the progress of Typhoon Yutu as it may impact either area after it passes through Central Luzon. The current forecasts from the Joint Typhoon Warning Center and PAGASA both call for the storm to cross into the South China Sea, but where the system may track after reaching this area is uncertain. Some models take the storm as far west as Hainan Island while others take the storm just offshore of western Taiwan.

Regardless, Yutu remains an extreme threat for a region that already been impacted by Super Typhoon Mangkhut, and may not be fully recovered from its effects. The government is acting to protect its people, but the time for preparations is running out as the dangerous storm bears down on the island nation.

Authors Note: To anyone reading this article that lives in the Philippines, Southern China, or Taiwan, please listen to local officials for any information. This is a potentially deadly situation, and it is key that you follow orders given by officials for your safety.