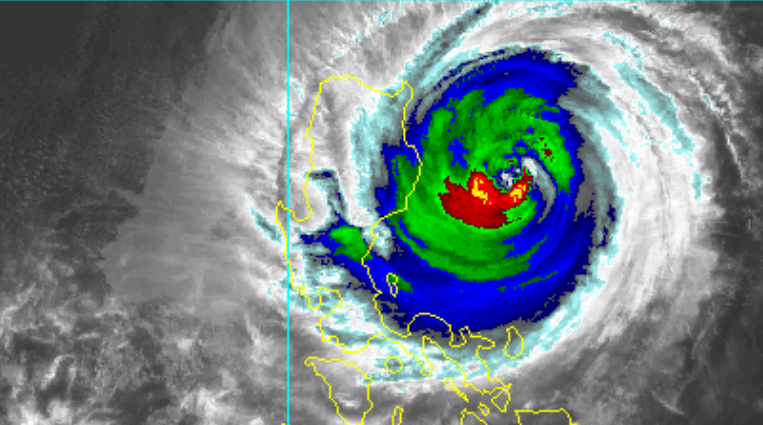 CONNECTICUT (F13) Typhoon Yutu, or Rosita in the Philippines, has maintained intensity on its final approach to landfall in the Northern Philippines, and is a life threatening situation for a region that has already been ravaged by another powerful typhoon in the near past. As of noon UTC the storm had maximum sustained winds of 105mph with a minimum pressure of 965mb, although its satellite presentation seems to have improved in recent hours. Yutu is expected to make landfall in the Philippines in less than twelve hours as a powerful typhoon with strong winds and heavy rain.

affects from the typhoon are already being felt as heavy rain and surf are starting to move ashore. It is likely that gale force sustained winds have already begun to reach the archipelago nation, and conditions will only continue to deteriorate throughout the night and early morning in the northern part of the nation. It is possible that gale force winds reach as far south as the Manila metro are as the storm passes over the country,

PAGASA, the Philippine weather agency has put most of Luzon under signal one warnings, and some areas have warnings as high as signal three. Signal three warnings indicate the potential for winds above 121kph within the next eighteen hours. The warning also includes the possibility of wave heights above fourteen meters and storm surge.

Over the past day evacuation orders were issued across the northern part of Luzon in low lying coastal areas and areas inland that may be prone to flash flooding or landslides. In most of the region, classes are cancelled for all school levels along with most stores. In Cagayan, the governor held a pre-disaster risk assessment meeting where he gave evacuation orders.

PAGASA was not available for immediate comment on what they have been doing to help the nation prepare for the storm, but it is clear that they are doing their job in issuing warnings and advisories on Yutu.

After crossing over the Philippines Yutu will move into the South China Sea, where a period of intensification is possible before the storm encounters more hostile conditions in a few days. However, interests in Hong Kong, Southern China and Taiwan should be monitoring the storm closely as it may impact any of these areas with rough surf, rain or wind. For the time being, Yutu is an extremely dangerous and powerful storm that is already impacting the Northern Philippines. It is a life threatening situation that should be taken seriously, and we at Force Thirteen will continue to provide updates on the situation frequently.

Authors Note: Typhoon Yutu is an extremely dangerous storm that is capable of causing loss of life. Anyone reading this article that live in Luzon should know that the time for preparation is over and that if you have not evacuated despite being told to do so, it is now too dangerous to leave your location. Please remain safe and listen to any information or orders given by local officials for your safety.