Hurricane Wilma: How strong was it?

By: Max Torres
In: Atlantic Ocean, Cyclone History
With: 0 Comments 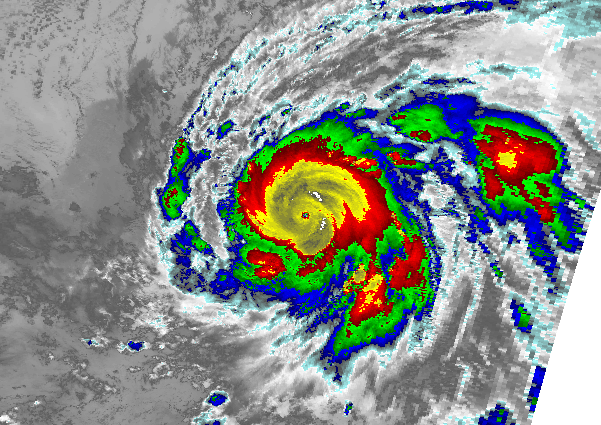 Hurricane Wilma was the 22nd storm of the record active 2005 Atlantic hurricane season and was the most intense tropical cyclone ever recorded in the Atlantic. But just how intense was it?  To answer this question, many factors have to be taken into account and some educated assumptions have to be made.

Officially, the National Hurricane Center (NHC) estimates Wilma to have maximum 1-minute sustained winds of 160kt (185mph) and a minimum central pressure of 882mb. However, this is likely at least a bit of an underestimate. So what’s Wilma’s actual intensity? To answer this question, we first have to look at the available data.

The highest wind speed directly measured in Wilma was 168kt in the southeastern eyewall at a 700mb flight-level at 0610 UTC 19 October. Using the standard 0.9 conversion method yields a surface wind of roughly 150kt (175mph). Because this reading was in the southeastern eyewall, it is likely that winds in the northeastern eyewall – the strongest part of the storm – were slightly higher. Therefore, an estimate of 155kt (180mph) for this time-frame seems reasonable. However, Wilma was still intensifying at the time of this reading, and because of this, it can be inferred that Wilma reached a higher wind speed by the time it stopped intensifying at around 1200 UTC 19 October, most likely around 165kt (190mph).

Unlike in most other storms, pressure is quite a bit harder to estimate than wind in Wilma. The lowest recorded pressure in the storm was 884mb at 0801 UTC 19 October with a surface wind of 23kt. Therefore, the actual pressure at this time was likely a bit lower, roughly 882mb. This is supported by the intensification from 4 hours earlier. However, just like with the wind, Wilma was still intensifying at this point, so the pressure was probably slightly lower than 882mb. To estimate the actual pressure, several different methods and values can be used. Wind-pressure relationship formulas like the Dvorak (1975), and the Post-ERC WPC will yield pressures of 894mb and 874mb respectively. Averaging the two values yields a pressure of 884mb. Next, this needs to be averaged with the lower of the two values because Wilma’s pressure was between the two. this yields a pressure 879mb.

So in conclusion, Hurricane Wilma most likely peaked with maximum 1-minute sustained winds of 165kt (190mph), and a minimum central pressure of 879mb.