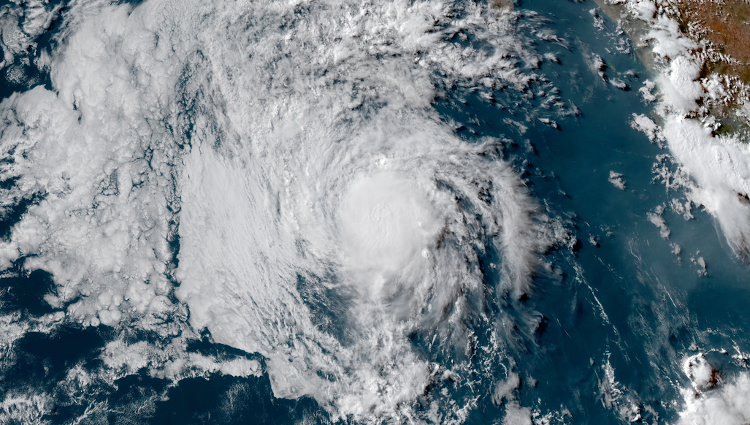 Quite surprisingly, and with no time to spare, Tropical Storm Alvin strengthened into a hurricane this morning as it was moving northwestward over the open waters of the Eastern Paific Ocean. At 11:00 EDT (03:00 UTC), the National Hurricane Center (NHC) upgraded Alvin to a hurricane, a decision supported by recent satellite estimates. As of the National Hurricane Center’s most recent advisory, the center of Hurricane Alvin was located at 17.4°N, 115.4°W, about 520 mi (840 km) southwest of the southern tip of the Baja California Peninsula. Alvin had maximum sustained winds of 75 mph (120 km/h), gusting to 90 mph (150 km/h), and the minimum central pressure was 992 mb (29.30 inches). The cyclone was moving northwestward at 16 mph (26 km/h), and a gradual turn toward the west-northwest with a decrease in forward speed is forecast over the next couple of days. As Alvin will soon enter a much less favorable environment, no further strengthening is forecast, and the cyclone is forecast to begin weakening later today. Alvin is a very small hurricane. Hurricane-force winds extend outward only 10 miles (20 km) from the center, while tropical storm-force winds extend 45 miles (75 km) from the center.

As Hurricane Alvin will soon be moving over cool ocean waters below 24°C (74.2°F) and into an area of significantly stronger southwesterly wind shear, it is unlikely that further intensification will occur. Essential all of the numerical model guidance shows no further intensification, and in fact they show the cyclone rapidly weakening as it enters a hostile environment. The official NHC forecast is in good agreement with the models, showing Alvin rapidly weakening and degenerating into a remnant low by Saturday. However, given the very small size of Alvin, this could occur sooner than forecast.

Alvin has been moving northwestward around the western edge of a subtropical ridge, and is expected to continue this movement during the next couple of days as it weakens. After that time, Alvin, or what is left of it, should gradually turn to the west and begin to slow down. Although Alvin will likely have degenerated into a remnant low by that time, a remnant circulation may still be identifiable for a little while after it has dissipated as a tropical cyclone, which is not uncommon of systems in the Northeastern Pacific Ocean. Although Alvin will be weakening and on its way to dissipation soon, computer models suggest that Alvin is just the beginning of a series of tropical cyclones in the Eastern Pacific Ocean during the next couple of weeks as the basin finally begins to awaken.

2019-06-28
Previous Post: When Will the Atlantic Start Seeing Activity?
Next Post: Alvin Dissipates; New East Pacific Disturbance Likely to Become a Tropical Depression Over the Weekend