Barry Becomes a Hurricane as it makes Landfall in Louisiana; Heavy Rainfall and Flood Threat Continues 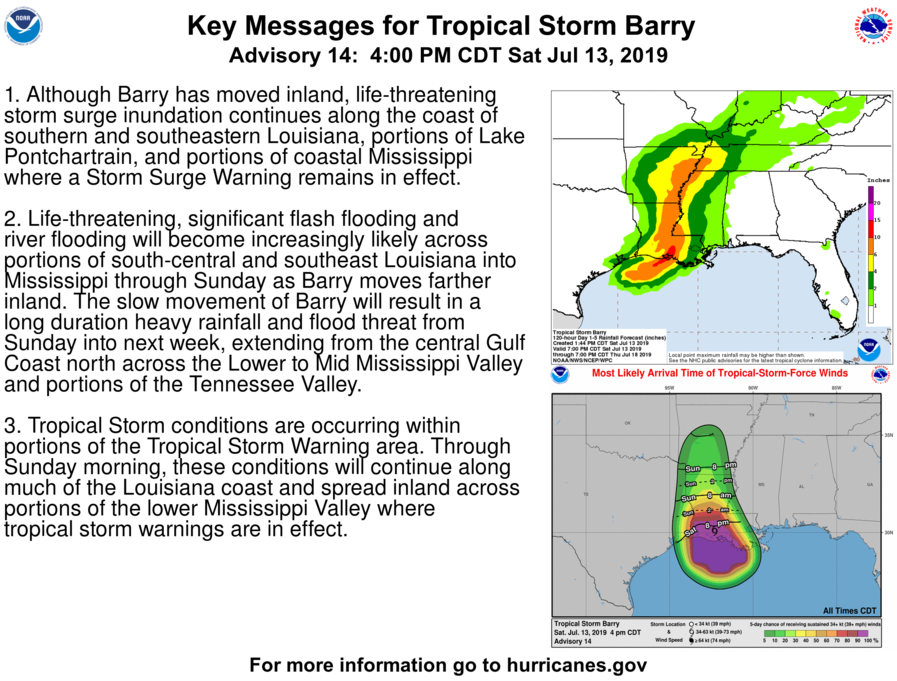 The National Hurricane Center (NHC) upgraded Tropical Storm Barry to a hurricane at 10:00 AM CDT (15:00 UTC) today shortly before it moved onshore. The cyclone made landfall this morning as a Category 1 hurricane with maximum sustained winds of 75 mph (120 km/h) on Marsh Island on the central Louisiana coast. Barry is one of only four hurricanes to have made landfall in the state of Louisiana in the month of July. The others are Hurricane Bob of 1979, Hurricane Danny of 1997, and Hurricane Cindy of 2005. Barry has since weakened as it continues to move inland, and is currently a tropical storm. As of the NHC’s most recent advisory at 4:00 PM CDT (21:00 UTC), the center of Tropical Storm Barry was located near 30.1°N, 92.3°W, about 20 mi (30 km) west-southwest of Lafayette, Louisiana, or about 85 mi (135 km) south of Alexandria, Louisiana. Maximum sustained winds have decreased to about 65 mph (100 km/h), with gusts to 75 mph (120 km/h), and the minimum central pressure is up to 997 mb (29.44 inches). Barry is moving north-northwestward at 7 mph (11 km/h), and this motion is expected to continue through tonight, followed by a turn to the north on Sunday. Tropical storm force winds extend outward up to 175 miles (280 km) from the center, and these winds are likely to be felt across much of Louisiana and into western Mississippi.

Barry is expected to gradually weaken now that it is deprived of the warm waters of the Gulf of Mexico and has begun to move inland. The tropical storm is forecast to weaken to a tropical depression by Sunday afternoon, and then become a post-tropical cyclone by Tuesday while located over southern Missouri. However, life-threatening flash flooding is expected to continue across much of the Mississippi Valley during the couple of days due to heavy rainfall the cyclone is expected to produce

Barry is currently located over southern Louisiana, and is expected to continue moving north-northwestward to northward through the Mississippi Valley during the net few days. Heavy rainfall is forecast across much of the area, especially in areas along the Mississippi River northward into southern Missouri and southwestern Kentucky. Several inches of rain have already fallen in much of the forecast area as the bulk of the rainfall and thunderstorm activity associated with Barry is moving inland. Additional rainfall amounts of 6 to 8 inches (152.4 to 203.2 mm) are expected across much of Louisiana, western Mississippi, eastern Arkansas, and portions of western Tennessee. Additional rainfall of 4 to 6 inches (101.6 mm to 152.4 mm) is forecast further east, north, and west of these areas, which includes central Arkansas and parts of Illinois and Kentucky. The Weather Prediction Center (WPC) puts these areas at a moderate risk for flash flooding, while central Louisiana and a portion of western Mississippi have been given a high risk of flash flooding. This heavy rainfall is likely to cause widespread and potentially damaging flash flooding. Flooding is one of the leading causes of death and damage from tropical cyclones. Rapidly-rising floodwaters can inundate roadways and buildings, and the force of the water is strong enough to carry heavy objects, such as vehicles, downstream. Never attempt to walk or drive into a flooded area, the water may be much deeper than it seems. Remember the National Weather Service’s words: Turn around, don’t drown!

There remains a threat for damaging winds across much of Louisiana tonight and into Sunday. Winds of tropical storm-force are likely through tonight and early Sunday morning as Barry moves inland. These winds could cause tree limbs to fall, and can also disable transformers, causing power outages. Additionally, there is a slight threat for a few tornadoes associated with Barry from central and western Louisiana into eastern Alabama and a small portion of the Florida Panhandle. The greatest tornado risk occur tonight and early Sunday morning. Tornadoes are very difficult to see and hear at night. If a tornado is occuring or imminent, take cover in an interior room or lowest floor of a building. Stay away from windows, and protect yourself from falling debris.