Tropical Storm Dorian Headed for the Lesser Antilles; Could Become a Hurricane in the Eastern Caribbean 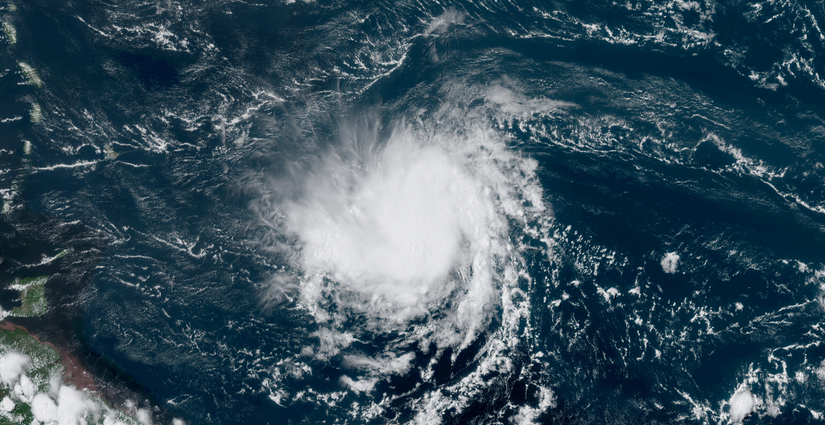 Tropical Storm Dorian has strengthened a little as it continues its westward track toward the Lesser Antilles. As most recent advisory from the National Hurricane Center (NHC) at 11:00 PM AST (03:00 UTC), the center of Tropical Storm Dorian was located near 11.7°N, 55.3°W, about 300 mi (485 km) east-southeast of Barbados, or about 410 mi (660 km) east-southeast of Saint Lucia. Dorian is moving toward the west at near 14 mph (22 km/h). The NHC forecasts the storm to turn west-northwestward on Monday, and continue in that direction through Tuesday, by which time the center of Dorian will be near the Windward Islands and moving into the Caribbean Sea. Maximum sustained winds are near 50 mph (85 km/h), with gusts to 65 mph (100 km/h), and the minimum central pressure was 1003 mb (29.62 inches). Strengthening is forecast during the next few days, and Dorian could become a hurricane by Tuesday while over the eastern Caribbean Sea. Although it has strengthened, Dorian is still a small tropical storm; tropical storm-force winds extend outward only 45 miles (75 km) from the center.

There is high uncertainty regarding the future track and potential intensity of Tropical Storm Dorian. The small size of the cyclone makes it susceptible to rapid changes in intensity (both and up and down), which further complicates forecasts. Furthermore, numerical model guidance depicts a wide range of possibilities with the future of this developing tropical cyclone. The GFS (American), and ECMWF (European) global models show little to no intensification, and instead dissipate Dorian over the eastern Caribbean by mid-week, likely due to dry air and an unfavorable environment associated with an upper-level low in this region which these models forecast. On the other hand, the statistical DSHIPS and LGEM models strengthen the cyclone up until it interacts with the rugged terrain of Hispaniola. The SHIPS Rapid Intensification Index is also higher than normal, showing a 50% chance of a 25-kt increase in winds during the next 24 hours, as well as a 44% chance of a 45-kt increase in winds during the next 36 hours. If Dorian can refrain from ingesting dry air and moisten the dry environment around it, such rapid intensification could occur, although only a small number of models show this occurring. The NHC’s official forecast is close to the numerical model consensus and shows Dorian becoming a minimal hurricane before making landfall in the Dominican Republic.

Dorian’s future track is dependent on its future intensity. A weaker system, such as that shown by the GFS and ECMWF global models, would track more westward and likely dissipate due to interaction with the large Caribbean Islands, namely Hispaniola. A stronger system would likely track further north near Puerto Rico and avoid significant interaction with Hispaniola. If Dorian strengthens more than forecast and takes a northerly track, it could remain a hurricane and intensify further over the western Atlantic, which could increase the potential impact for the Bahamas and Southeastern United States. However, it is too soon to determine if this will occur. The NHC forecasts Dorian to pass over Hispaniola by Thursday and be moving through the Bahamas by Friday, and is in accordance with the corrected model consensus.

Potential Impacts and Areas at Risk

Dorian is expected to impact portions of the Lesser Antilles as a tropical storm, where tropical storm watches and warnings are already in effect. The tropical storm could produce heavy rainfall amounts of up to 6 inches across the islands. Heavy rainfall is one of the primary threats associated with tropical cyclones. These rains can cause flash flooding and mud slides, which pose a significant threat to life and property. Rapidly-rising flood waters can inundate roads and structures quickly, while fast-moving mud slides can sweep away large objects. Tropical Storm Watches are currently in effect for the islands of Dominica, Martinique, and Grenada, while Tropical Storm Warnings are in effect for Barbados, Saint Lucia, and Saint Vincent and the Grenadines. Swells generated by Dorian will arrive in the Lesser Antilles by late Monday, and may create rough surf conditions and hazardous seas which may be dangerous to mariners. Within the warning area, tropical storm conditions are likely to begin by late Monday, while tropical storm conditions are possible in the watch area by Monday night or Tuesday. Residents in the Lesser Antilles are advised to refer to advice from local government officials and their local meteorological services for more information.

Although it is too soon to determine the time and magnitude of possible impacts in Puerto Rico, the Virgin Islands, and Hispaniola. Residents in those areas should closely monitor the progress of Dorian. Residents in Cuba, the Bahamas, and southern Florida should also closely monitor the progress of Dorian, as depending on the storm’s future path, direct impacts could occur in these areas.