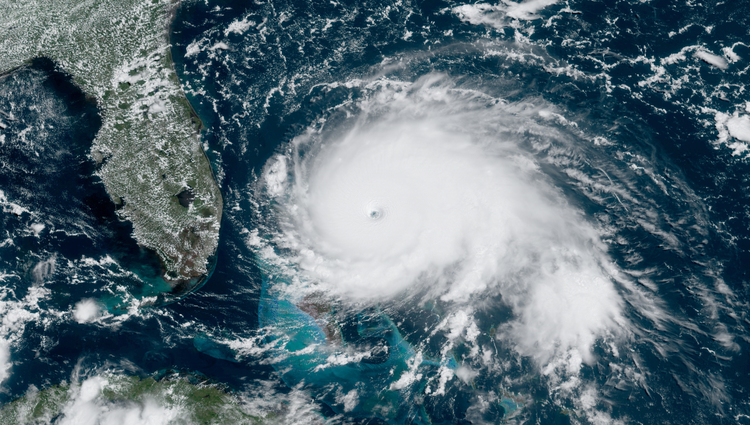 Hurricane Dorian has continued to intensify today and is now an extremely dangerous Category 5 hurricane, currently situated over the Abaco Islands in the northwestern Bahamas. As of the National Hurricane Center’s most recent update at 10:00 PM AST (02:00 UTC), the eye of Hurricane Dorian was located near 26.6°N, 77.8°W, about 60 mi (95 km) east of Freeport, or about 140 mi (225 km) east of West Palm Beach, Florida. Dorian is moving slowly westward at 5 mph (7 km/h), and the hurricane is forecast to slow down even more during the next day or so before a turn toward the northwest begins. Dorian will continue to impact the northwestern Bahamas through Monday before moving dangerously close to the east Florida coast late Monday and on Tuesday. After that time, Dorian is forecast to accelerate northeastward, passing near the coasts of South Carolina and North Carolina by late week.  Maximum sustained winds are near 185 mph (295 km/h), with gusts to 225 mph (360 km/h), and the minimum central pressure was 915 mb (27.02 inches). Dorian is forecast to remain a powerful and very dangerous hurricane during the next few days, although fluctuations in intensity are likely. Hurricane-force winds extend outward up to 45 miles (75 km) from the center of Dorian, while tropical storm-force winds extend outward up to 140 miles (220 km).

There remains uncertainty in the track of Dorian during the next few days. Steering currents which have guided Dorian on its track the past few days have weakened considerably, and the cyclone has now slowed drastically as it continues westward. A high pressure ridge to its north should maintain the hurricane’s westward motion during the next couple of days, while a trough over the Eastern United States is forecast to cause Dorian to turn northward. However, the exact timing of this northward turn is uncertain. If the turn occurs sooner, Dorian will likely remain offshore and perhaps move parallel to the east coast of the United States. However, if this turn occurs later, Dorian could move very close to, or even make landfall, on the east coast of Florida before or as it makes this northward turn. The official forecast from the NHC shows the former happening, with Dorian remaining offshore. However, the forecast track has been shifting westward recently, and only a small deviation to the left of the forecast track could greatly increase impacts in the United States.

Please refer to the National Hurricane Center and your local meteorological service for further information regarding Tropical Storm Dorian, as well as watches and warnings currently in effect. Force Thirteen is providing full coverage on Hurricane Dorian and has activated the Automated 24-hour streaming service. Additionally, live updates and Tropical Weather Bulletins can be found at the Force Thirteen YouTube channel. More information can be found at Force Thirteen’s Twitter and Facebook pages.