Hurricane Lorenzo Approaching the Azores and the British Isles

As of 434pm EDT 1 October, 2019, Hurricane Lorenzo was located at 37.0N 35.5W and had a 1-minute sustained wind speed of 100mph and a central pressure of 960mb and was moving northeast at 29mph. Hurricane warnings are in effect for all of the Azores and Lorenzo is expected to pass near or over the westernmost islands before turning post-tropical and moving over the British Isles. 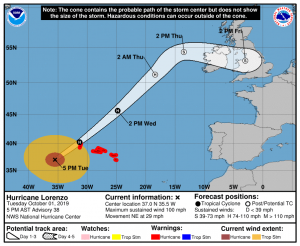 Tropical storm force winds are currently affecting the westernmost Azores with hurricane fore winds expected in the next several hours. Tropical storm force winds are expected in Ireland sometime Thursday morning and in Great Britain by the evening (AST) from what will likely be the post-tropical remnants of Lorenzo. Note: Just because Lorenzo will be post-tropical by then, doesn’t mean it won’t bring potentially life-threatening conditions to the British Isles and residents there should still be on alert.