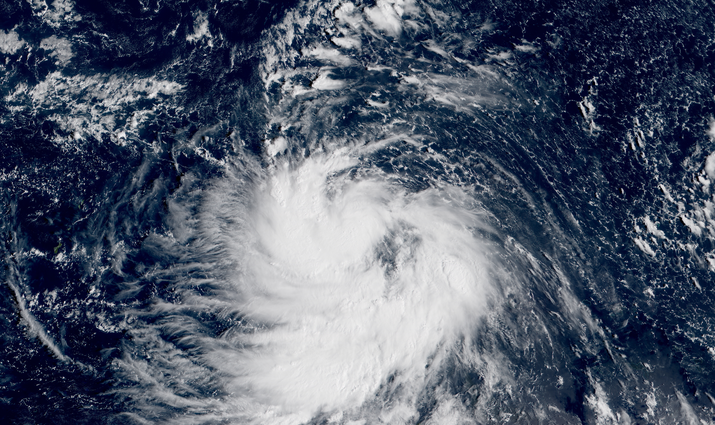 Tropical Storm Hagibis has formed in the Western North Pacific, and its looking likely that it could become a potent and potentially dangerous tropical cyclone. The cyclone is the nineteenth tropical storm of the Pacific typhoon season, and its name, contributed to the basin’s naming lists by the Philippines, means “swift” in the Filipino language. Hagibis currently threatens the Mariana Islands and could impact the Ryukyu Islands and Japan next week.

As of the most recent advisory from the Joint Typhoon Warning Center (JTWC) at 00:00 UTC October 6, the center of Tropical Storm Hagibis was located near 14.9°N, 155.8°E, about 735 miles east of Andersen Air Force Base, Guam. Hagibis has maximum sustained winds of near 50 mph (85 km/h), and is moving toward the west at around 21 mph (34 km/h). Hagibis is forecast to intensify significantly during the next few days: the cyclone is forecast to be a typhoon as it passes through the Mariana Islands, and further intensify into a super typhoon (defined by the JTWC as a typhoon with maximum sustained winds of 150 mph (240 km/h) or greater) by Thursday. The JTWC’s forecast is in good agreement with the global models and the GFS/CMC ensembles, which unanimously show significant intensification occurring as the cyclone moves through a very favorable atmospheric environment and over sea surface temperatures of 30 to 31°C.

Models are in nearly unanimous agreement that Hagibis will intensify significantly during the next few days, and with a very favorable environment present, there doesn’t seem to be any reason as to why the cyclone would not strengthen. Vertical wind shear is low, ocean heat content values are very high, and Hagibis will be moving over some of the warmest sea surface temperatures in the Western Pacific at 30 to 31°C (86 to 88°F). These environmental conditions should support steady, and very possibly rapid intensification. In fact, nearly all of the GFS Ensembles show Hagibis reaching a minimum barometric pressure below 930 mb, indicative of a very powerful tropical cyclone. The GFS Global model shows a nearly identical solution, and bottoms the cyclone out at 925 mb. The HWRF is even more aggressive and bottoms the cyclone out at 912 mb after taking it through the Mariana Islands as a Category 4 (on the Saffir-Simpson Hurricane Scale) cyclone. Given the very favorable environment, it is very possible that Hagibis could attain such an intensity.

There is also excellent agreement among the models as to the future track of Hagibis. Both the GFS and ECMWF Global models show Hagibis taking a climatological westward track during the next two to three days before turning northwestward and striking Japan before recurving northeastward over the weekend and becoming extratropical over the northern Pacific Ocean. The respective ensembles are in good agreement with the global models on this track.

Impact and Areas at Risk

Tropical Storm Hagibis is forecast to intensify into a typhoon as it passes through the Mariana Islands on Monday night and early Tuesday morning. A typhoon watch is in effect for Alamagan, and a tropical storm watch is in effect for Rota, Tinian, and Saipan in the CNMI, and for Pagan and Agrihan in the northern CNMI. Tropical storm conditions are possible in the watch area by Monday afternoon, and typhoon conditions are possible by Monday night. Seas will quickly build across the Northern Mariana Islands as winds increase Monday and Tuesday. Seas are forecast to reach between 14 and 16 feet in Tinian and Saipan waters and up to 10 to 12 feet in Rota waters by early Monday evening. Along windward coasts, up to 2 feet of storm surge inundation is possible, and may cause beach erosion and damage to property close to the shore. Additionally, heavy rainfall amounts of 5 to 8 inches are forecast at Tinian and Saipan and 2 to 4 inches at Rota are forecast from Monday through Tuesday as Hagibis passes through the area. These rains could cause life-threatening flash floods and mudslides, especially in mountainous and low-lying areas. Residents in the Northern Mariana Islands should closely monitor the progress of Hagibis and take proper precautionary measures to prepare for the storm.

Although it is too soon to determine the timing and magnitude of any impacts from Hagibis in Japan and the Ryukyu Islands, residents there should closely monitor the progress of the storm and refer to products issued by the Japan Meteorological Service for further information.