By: Cooper S.
In: Atlantic Ocean, Pacific Ocean
With: 0 Comments 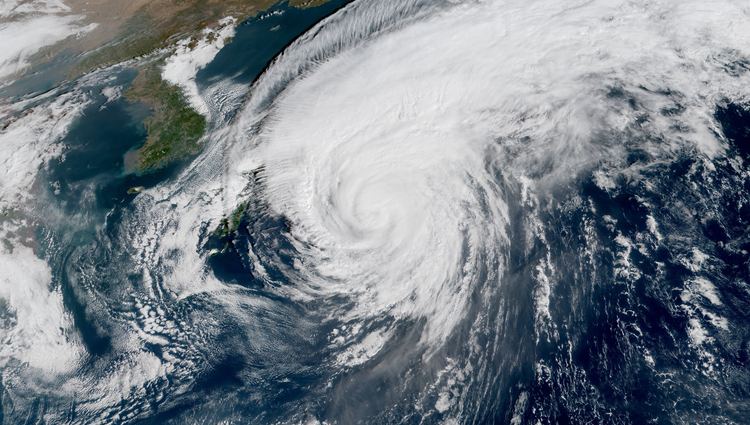 Typhoon Hagibis continues its approach toward the Japanese island of Honshu as a large and still powerful typhoon. The powerful cyclone peaked as a Category 5 super typhoon on Wednesday before beginning a slow weakening trend. It remains a Category 2 system this morning and should continue to gradually weaken as it continues its approach to Japan. However, Hagibis will remain a very dangerous and life-threatening typhoon through today before conditions begin to improve on Sunday. Meanwhile, in the Western Hemisphere, a strong coastal low which has been producing large swells along the U.S East Coast has transitioned into a subtropical storm, and has been named Melissa by the National Hurricane Center (NHC). Melissa is forecast to gradually weaken and lose its subtropical characteristics over the next couple of days as it moves northeastward, away from the coast. However, large swells and strong winds will continue to affect the Northeastern and Mid-Atlantic coasts through Sunday.

A powerful coastal low, often known as a Nor’Easter in many parts of the U.S East Coast, which has been intensifying off the southern New England coast this week has acquired the characteristics of a subtropical cyclone, and has been classified as Subtropical Storm Melissa. As of the National Hurricane Center’s most recent advisory at 5:00 PM EDT (21:00 UTC) October 11, the center of Subtropical Storm Melissa is located near 38.2°N, 69.5°W, about 210 mi (225 km) south of Nantucket, Massachusetts. Melissa is moving toward the south-southeast at near 3 mph (6 km/h), and is forecast to turn toward the east tonight and accelerate, with this motion continuing through Monday. Maximum sustained winds are near 60 mph (95 km/h), and the minimum central pressure is 997 mb (29.44 inches). Melissa is forecast to gradually weaken over the next couple of days and become extratropical by Monday. Melissa is a large cyclone, and gales extend outward up to 345 miles (555 km) from the center of the storm.

The development of subtropical and tropical cyclones from these types of coastal lows is an uncommon occurence, but there have been a number of recorded instances, most notably an unnamed hurricane in November 1991 which caused significant damage in New England while an extratropical cyclone. Although the low is now a subtropical cyclone, the change in storm status does not change the anticipated impact from the cyclone in southern New England and the Mid-Atlantic. Melissa is expected to produce large swells , strong winds, and moderate coastal flooding in portions of the southern New England and South Atlantic states through Sunday. For more information, refer to products issued by local National Weather Service offices at www.weather.gov.