By: Cooper S.
In: Australia
With: 0 Comments 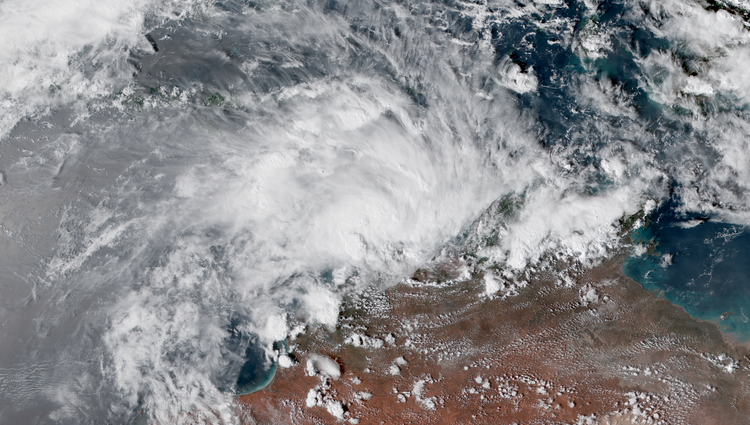 Tropical Cyclone Claudia has formed off Australia’s Kimberly Coast to the northeast of Kalumburu, and is forecast to intensify as it moves southwestward over open waters off Australia’s western coast. Claudia is the second tropical cyclone of the Australian cyclone season, following Blake, which impacted portions of Western Australia earlier this week. The Bureau of Meteorology (BOM) has placed cyclone warnings in effect from Kalumburu to Beagle Bay through Sunday, where gale-force winds and periods of heavy rainfall are possible through Sunday night.

As of 21:00 UTC Saturday, January 11, 2020, Tropical Cyclone Claudia is located within 55 km (35 mi) of 13.2°S, 125.9°E, about 145 km (80 mi) north-northwest of Kalumburu, and about 295 km (185 mi) north-northeast of Kuri Bay. Claudia is moving toward the west at 21 km/h (13 mph), and a turn to the southwest is expected to begin by Sunday morning, with the cyclone continuing a generally westward to southwestward track through the next few days. Maximum 10-minute sustained winds are 40 mph (65 km/h), and maximum 1-minute sustained winds are 40 mph (65 km/h). Claudia is a Category 1 tropical cyclone on the Australian tropical cyclone intensity scale, and it is forecast to intensity into a Category 2 tropical cyclone on Sunday, and a Category 3 tropical cyclone by Monday. By Tuesday, Claudia is forecast to weaken as it passes over cooler waters and into a less favorable atmospheric environment.

Claudia is expected to produce gales, with gusts of up to 100 km/h (65 mp, in coastal areas between Kalumburu and Kuri Bay through Sunday, extending to Beagle Bay Sunday night. Periods of heavy rainfall are also possible in areas of the north and northwest Kimberly coast through Sunday night. The Department of Fire and Emergency Services (DFES) in Western Australia advises that residents of communities from Kalumburu to Cape Leveque, not including Kalumburu and Derby, prepare for tropical cyclone conditions and organize an emergency kit. An emergency kit should include food and water, a torch, first aid, spare batteries, and a portable radio. For more information regarding Tropical Cyclone Claudia, visit the Bureau of Meteorology on the web, and refer to your local news and government outlets.