By: Preston Schenk
In: United States
With: 0 Comments 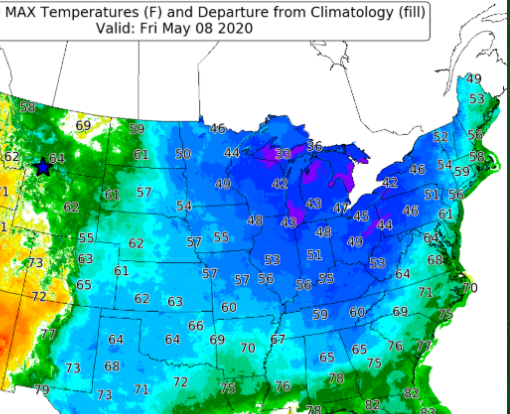 A rare May cold snap occurred over regions of the Northern US this weekend, accompanied with snow in isolated regions, causing areas of the Upper Midwest and Northeast to experience temperatures usual for March in the second week of May. The cold weather was an unwelcomed sight for many wishing to enjoy the spring weather.

Heavy snow occurred this weekend over portions of the far NE US, with portions of Maine receiving two to four inches of a heavy, wet snow, with some areas receiving close to a foot of snow! Maine wasn’t the only state to receive snow however, as portions of Wisconsin received an inch or two of snow on Mother’s Day. In New York City, flakes flew in the air, making it one of the latest days snow has fallen in NYC before the season totals reset.

Besides the heaving snow falling in regions of the Northern US, the most widespread impact of the cold snap was the bitterly cold temperatures that scooted in starting last Thursday. Many areas of the eastern US were covered in Freeze Warnings as the cold snap affected growing seasons. Freeze Warnings were issued from Wisconsin all the way down to northern parts of Georgia! Many areas saw records broken or shattered from the intense cold.

Here are some of the record lows set on May 11:

Here are some of the record lows set on May 10th:

Here are some of the record lows set on May 9th:

Freeze Warnings are still in effect for regions of the Eastern US as the cold weather is anticipated to stick around before warmer weather arrives, which has been hinted by the CPC in their 8-14 temperature outlook.