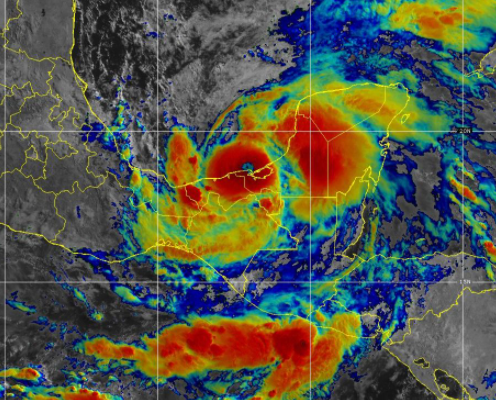 Tropical Storm Cristobal has strengthened this morning with winds of 60mph and a pressure of 994 millibars. The storm was located at 18.8 North, and 92.1 West, about 125 miles from Campeche. The storm has strengthened considerably from yesterday, as winds have continued to increase, and has officially made landfall as of 8:45CDT. Nevertheless, very heavy rain will still be the main threat in areas of the Yucatan Peninsula, where it will make landfall later today adding more heavy rain to an area which has been pummeled by Cristobal for a few days. Cristobal will weaken after making landfall, but will strengthen as it leaves the Yucatan on approach to Louisiana as a strong tropical storm. Currently, flooding is the most significant threat from Cristobal, with some areas already having received 2 feet of rain in the last 36 hours. Mudslides will be possible as well. The storm will likely weaken after landfall, with further strengthening likely as it moves into open waters.

Cristobal will likely stall in the Yucatan Peninsula, continuing to soak areas of the Yucatan with intense rainfall rates. The storm will weaken significantly in the meantime due to the landfall, but will continue to soak areas of the Yucatan. Cristobal will leave the peninsula and intensify to a strong tropical storm on approach to the Louisiana coast, possibly becoming the first US landfall of the season. All eyes in Louisiana and surrounding areas should be focused on this storm, due to the potential for very heavy rainfall and strong winds approaching 65mph, with hurricane force gusts a possibility. The track later in the week is not set in stone, as the track could shift all the way to Houston, although unlikely. However, the short-term threat remains significant for areas of the Yucatan due to the intense rainfall amounts already in the region, with more likely to come. Here is the latest forecast cone from the National Hurricane Center, depicting the Cristobal to be affecting the Yucatan for at least two and a half to three more days before reintensifying on approach to the US Gulf Coast.

Stay informed with Cristobal and other Atlantic storms via future updates on the Force Thirteen Youtube channel, as well as our various social mediums on Twitter and Facebook.