98W Likely to Strike the Philippines in the Coming Days

By: Preston Schenk
In: Pacific Ocean, Typhoon
With: 0 Comments 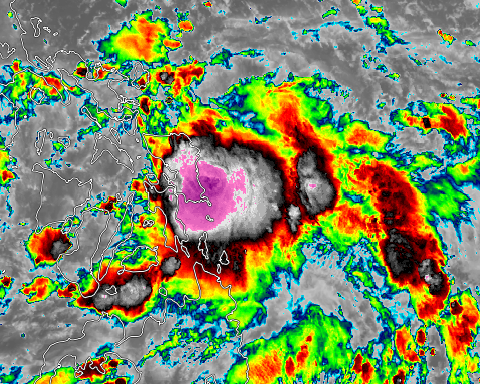 Newly designated Invest 98W will likely strike the Philippines later this week as a tropical storm, and potentially strike Hong Kong by Monday morning. At 7AM PHT, the invest was located at 11 degrees North and 126.4 degrees East, or 72km from Guiuan, moving West-Northwest at around 8mph (13kph.) The invest is likely to become a tropical storm by Friday morning, and strike Luzon on Saturday. The main threat at landfall is expected to be heavy rain, leading to potentially significant flooding. The storm is expected to reintensify after landfall as it moves into the South China Sea. If the invest does develop as forecasted, it would become the second named storm in the Basin this year- one of the latest second named storms in years.

98W will continue to move West-Northwestward, grazing the coast of Samar as it gradually gets better organized, likely becoming a tropical storm. The most likely landfall area will be Luzon on Saturday. Impacts are likely to be weak, but heavy rain and strong winds will contribute to flooding and wind damage wherever landfall does occur on Luzon. After landfall, the system will eventually pass into the South China Sea, likely reintensifying before making another landfall near Hong Kong Monday morning. There is a chance that the cone may shift in the next few days, however the threats will still be the same, with strong winds and flooding being possible wherever landfall occurs.

Future updates on 98W and systems in the Western Pacific can be found on the Force Thirteen Youtube channel, as well as our various social mediums on Twitter and Facebook.