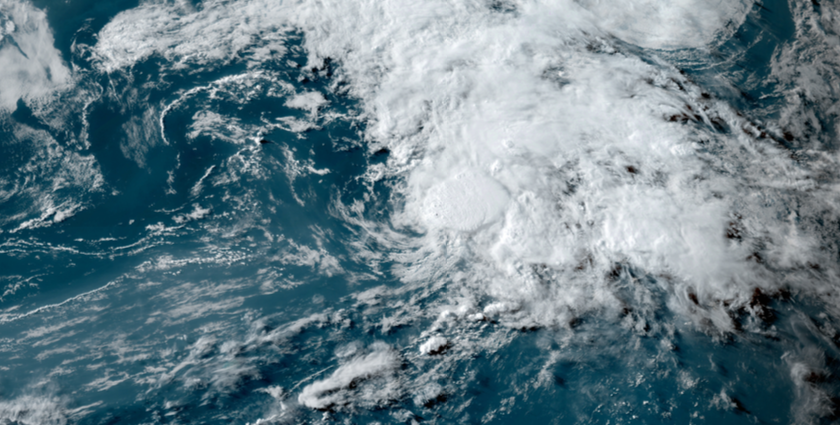 Tropical Depression Five, which formed Saturday and passed near Bermuda Sunday morning, has strengthened this morning, and is now Tropical Storm Edouard. This is the fifth named storm of the 2020 Atlantic hurricane season and the first in the month of July. Edouard is also the earliest fifth-named storm for the North Atlantic basin in the historical record that extends back to 1851, surpassing the previous record set by Category 5 Hurricane Emily of 2005, which formed on July 12. As of the most recent advisory from the National Hurricane Center (NHC) at 11:00 PM AST (03:00 UTC), the center of Tropical Storm Edouard was located near 37.2°N, 56.9°W, about 685 mi (1100 km) south-southwest of Cape Race, Newfoundland. Maximum sustained winds are near 40 mph (75 km/h) with gusts to 50 mph (85 km/h), and the minimum central pressure is 1008 mb (29.77 inches). Tropical storm-force winds extend outward up to 60 mi (95 km) from the center of Edouard. Edouard is moving quickly northeastward at around 35 mph (56 km/h), and the cyclone is forecast to continue to accelerate along that general direction during the next couple of days. Edouard could strengthen a little more today before the cyclone becomes extratropical Monday evening or early Tuesday morning.

Edouard is currently moving rapidly northeastward, and numerical models are in tight agreement on a continuation of a generally northeastward to east-northeastward motion during the next couple of days as Edouard encroaches on a middle-latitude trough and frontal boundary. The cyclone is expected to become extratropical by Monday evening or early Tuesday morning, as depicted by the official NHC forecast. Some slight additional strengthening is possible due to baroclinic forcing as the trough impinges on the tropical cyclone; by Tuesday afternoon, Edouard, or, more likely, its remnants, should begin to gradually weaken before dissipating on Wednesday as the trough overtakes, and ultimately absorbs the system. This trough should continue quickly eastward and may bring unsettled weather to much of the British Isles and northern Europe from Thursday and Friday into the weekend. Refer to your local meteorological office for further information about this event.