Tropical Storm Fay Forms off the North Carolina Coast; Expected to Impact Portions of the Mid-Atlantic and Northeast U.S Coast 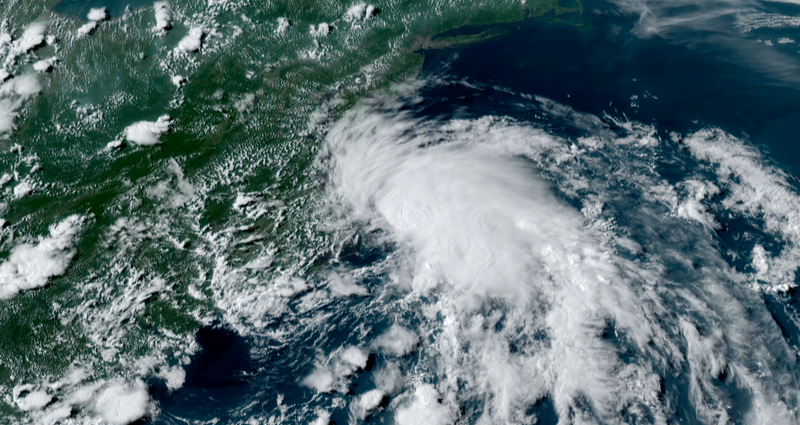 The broad area of low pressure (designated Invest 98L by the United States Navy) that the National Hurricane Center (NHC) has been monitoring during the past several days has become better organized today, with the center of low pressure reforming under a concentrated and well-organized convective mass off the North Carolina coast. In addition, an Air Force Reserve reconnaissance aircraft investigated the disturbance earlier today, and was able to pinpoint a closed center of circulation near the eastern edge of the primary convective mass. As a result, the NHC have initiated advisories on Tropical Storm Fay. It is the sixth named storm of the 2020 Atlantic hurricane season, and the second in the month of July, following closely on the heels of Edouard, which formed last week on July 4. Fay is also the earliest sixth-named storm for the North Atlantic basin in the historical record that extends back to 1851, surpassing the previous record set by Tropical Storm Franklin of 2005, which formed on July 21. Fay is currently located off the North Carolina coast, and is forecast to move generally northeastward near the Mid-Atlantic and Northeast U.S coasts, where heavy rain, large swells, and tropical storm conditions are expected.

As of the National Hurricane Center’s most recent advisory on Fay at 5:00 PM EDT (21:00 UTC), the center of Tropical Storm Fay was located near 35.5°N, 74.9°W, about 40 mi (65 km) east-northeast of Cape Hatteras, North Carolina, and about 195 mi (310 km) south of Ocean City, Maryland. Maximum sustained winds are near 45 mph (75 km/h) with gusts to 60 mph (95 km/h), the minimum central pressure is 1005 mb (29.68 inches), and tropical storm-force winds extend outward up to 140 mi (220 km), mainly to the east and southeast of the center. Fay is moving toward the north at around 7 mph (11 km/h), and a northward to north-northeastward motion is expected to continue over the next couple of days, with a gradual increase in forward speed. On the NHC’s forecast track, the center of Fay is forecast to move near the Delmarva Peninsula on Friday, and move inland over the Northeastern U.S coast on Saturday. Some slight strengthening is forecast before Fay reaches the coast. Weakening is expected to begin after the center moves inland on Saturday, and the cyclone is expected to become post-tropical by Sunday morning over southern Quebec.

Since a new center of circulation has recently formed, the initial motion of Fay is highly uncertain. The cyclone is expected to move generally northward between an extensive high pressure ridge over the western Atlantic and a mid-latitude trough approaching from the west over the Midwestern United States. The dynamical model guidance shifted considerably eastward at 18:00 UTC, and as a result they display a track further offshore than the global model guidance does. As a result, the NHC forecast track is a compromise between the two, closer to the left side of the dynamical model guidance. Most of the dynamical and statistical models also show at least some slight strengthening before Fay moves onshore on Saturday. The NHC intensity forecast calls for Fay to reach an intensity of 50 mph (85 km/h) before it moves onshore, although some of the model guidance suggests that it could strengthen a little more than that. After it moves inland, Fay should begin to weaken, and the model guidance as well as the official NHC forecast both show the cyclone losing its tropical characteristics by Sunday morning.

Fay is expected to produce total rainfall accumulations of 3 to 5 inches (75 to 125 mm) with isolated totals of up to 8 inches (205 mm) along and near the storm track across the Mid-Atlantic and Northeastern U.S coast, with the greatest accumulations anticipated near the coast of Maryland and southern Delaware. These heavy rains may result in flash flooding where the heaviest rainfall totals occur, which may produce life-threatening freshwater and flash flooding. Flooding is one of the leading causes of damage and deaths from tropical cyclones. Never attempt to walk or drive into a flooded area, the water may be much deeper than it appears. If flash flooding is occurring, move to higher ground and stay away from the flooded area. Tropical storm conditions are expected across these areas from Friday through Saturday morning, and Tropical Storm Warnings have been issued for the coasts of New Jersey, New York, and Connecticut, including Long Island. A Tropical Storm Warning means that tropical storm conditions are occuring or are expected to occur across the warned area within 36 hours. Winds of 37 mph (60 km/h) may cause damage to unprotected buildings, vehicles, and unsecured objects. Ensure that you have taken proper precautionary measures and have an emergency plan in action in case basic utilities become inaccessible during a tropical cyclone event. Please refer to the National Hurricane Center and your local National Weather Service for further information regarding Tropical Storm Fay.

Please refer to the National Hurricane Center and National Weather Service websites for further information regarding Tropical Storm Fay as well as watches and warnings in effect. Force Thirteen will begin providing live coverage on Tropical Storm Fay this evening, and will continue to provide live coverage and daily updates as conditions warrant. More information can be found at Force Thirteen’s official outlets, including its Twitter and Facebook pages.