While Saudel is meeting its end, Molave rapidly intensified and smash the Philippines. Vietnam will be its next target.

By: Kenneth Chan
In: Pacific Ocean, Typhoon
With: 0 Comments 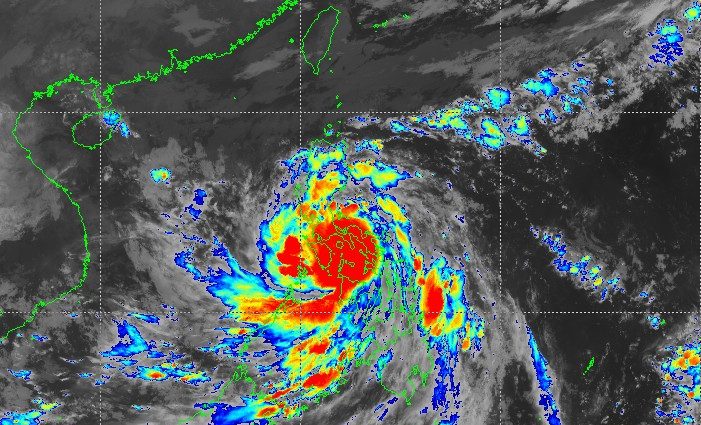 Surprise surprise, Molave intensified rapidly from tropical storm to typhoon just 18 hours after naming. Its CDO rolled quickly and forming an eye, apparently shown in visible and radar imagery.  The central part of the Philippines is suffering from typhoon force winds and torrential rain, threatening people’s lives there. Large swaths of Bicol region is now out of power with transmission lines being broken, severe flooding is reported over many places in central Philippines, and the impact is still spreading. After brushing the Philippines, it will re-intensify to a higher intensity and yet again, approaching Vietnam, imposing even bigger threat since Saudel, which now has weakened to a mere tropical storm, and is going to make landfall over Hà Tĩnh Province, Vietnam soon.

Forecast Track, Intensity and Areas of Impact
After brushing the Philippines, it’s expected to continue its ~25km/h west or west-northwest movement, and intensify further in central portion of South China Sea to an upper-end typhoon or even severe typhoon on Tuesday or Wednesday, predicted by various agencies in the Western Pacific, then weaken a bit possibly due to cooler sea surface temperature near the western edge of South China Sea. Yet still, it will impose significant threat to Vietnam again, bringing typhoon force winds and even heavier rainfall, and likely, becoming the strongest landfalling storm over Vietnam this year up to this October. The central Vietnam flooding occurred earlier this month due to southwest monsoon brought from the Bay of Bengal that caused persistence rainfall, as well as 4 tropical cyclones (Linfa, Nangka, “Ofel” (PH name) and Saudel bearing on there before Molave as well. With Molave also approaching, this further worsen the flooding hazard in central Vietnam and this should gain more attention.

As of 22:00 Indochina standard time, (15:00UTC), according to JMA’s advisory, Saudel is located at 17.6N 107.6E, with max 10-minute sustain winds of 18m/s and a pressure of 1002hPa, moving west with 15km/h speed. It will make landfall on Hà Tĩnh Province early next morning and dissipate over Laos. On Con Co Island, Vietnam F6 winds and F8 gust in Beaufort scale are recorded, and from Nghe An to Thua Thien Hue provinces, 30-80mm rainfall is nowcasted and this amount is expected to remain around the same in the next 24 hours. Level 3 warning of natural disaster risk is still in affect in Vietnam.

2020-10-25
Previous Post: Hurricane Epsilon undergoing extratropical transition, while 95L rises up in the west Caribbean.
Next Post: Zeta will strike Yucatan as a hurricane tomorrow. Louisiana and Mississippi are the next.