By: Kin Largadas
In: Typhoon
With: 0 Comments

Tropical Storm Vamco continues to organize itself, and is continuing to intensify in the last few hours.

Vamco is currently located near 14.4 degrees north, 126.6 degrees east, approximately 326 nautical miles east of the Philippines’ capital, Manila. It has a maximum sustained winds of 50 mph (85 km/h) and a minimum pressure of 996 millibars. The storm is currently moving west-northwest at 13 knots (15 mph) and the storm is very broad in size. Vamco is forecast to intensify into a category 1 typhoon before making landfall in Central Luzon in the Philippines. The Philippines’ local agency, PAGASA, has issued warnings in preparation for this storm. 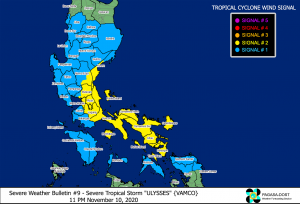 Please prepare for this storm, as heavy rainfall is expected due to the storm’s size. Keep updated with your local agencies, and evacuate if said to. Stay tuned for updates.