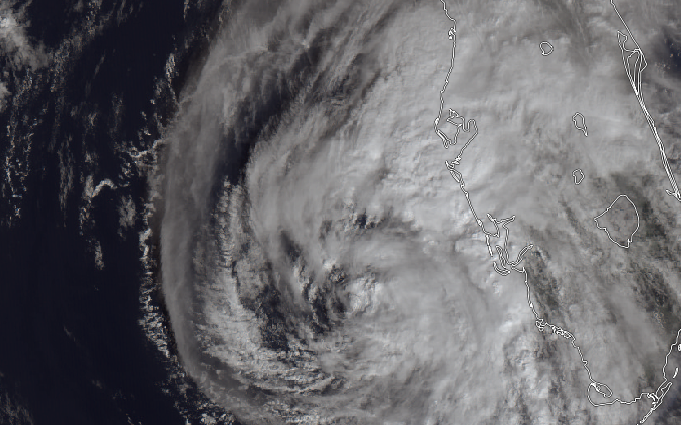 At about 4:00 AM EST, Eta was upgraded to a hurricane off the coast of Florida. It remains a hurricane as of 10:00 AM.

Eta is currently located at about 26.2N, 83.7W, and is moving to the North-Northeast at about 10mph. It currently has maximum sustained winds of 75mph, with higher gusts. Eta currently has a pressure of 983mb, which is based off of aircraft reconnaissance observations. Eta is a somewhat large storm, with tropical storm force winds extending outward to 115 miles from the center. Hurricane force winds extend out to 60 miles from the northeast of the center.

Eta will continue this North-Northeast movement for the next 24 hours until landfall in central Florida. Eta is currently forecasted to weaken back down to a strong tropical storm within the next 12 hours, and will continue weakening until it’s landfall, with a forecasted intensity of 65mph. After landfall, Eta will rapidly weaken into a tropical depression. The storm will move more Northeast, and move over the Atlantic waters. It will soon afterwards transition into an extratropical cyclone, and move quickly out to sea away from land.

#Eta has managed to regain #hurricane status as it moves towards the #Florida Coast. Further heavy and flooding rains are expected, alongside damaging winds and dangerous storm surge.#flwx pic.twitter.com/4TB2Vykbl2

The main threat from Eta appears to be the water related hazards; storm surge and rainfall. Storm surge values of about 3-5 feet are expected along the Western coast of Florida from Anclote River southward to Boca Grande, including the Tampa Bay area. This is enough to cause significant property damage to homes and vehicles near the water, not to mention the deadly waves and rip currents that will accompany the water. Additional rainfall totals of 4-6 inches are possible along the coast at and south of the Tampa bay area to Marco Island. Rainfall totals of over 1 inch are also possible along the western half of the Florida peninsula. There is still a considerable wind threat as well, with tropical storm force winds already reaching the coast in some places. Sustained winds of 65mph are expected around the area of landfall. There is still a small chance of hurricane force gusts where a hurricane watch is currently in effect.

Here is a list of watches and warnings from the National Hurricane Center.

Everyone in the path of this storm should now rush preparations to completion, and stay safe. Stay tuned to local officials for information about your specific location.