By: wer
In: Atlantic Ocean, Hurricane
With: 0 Comments 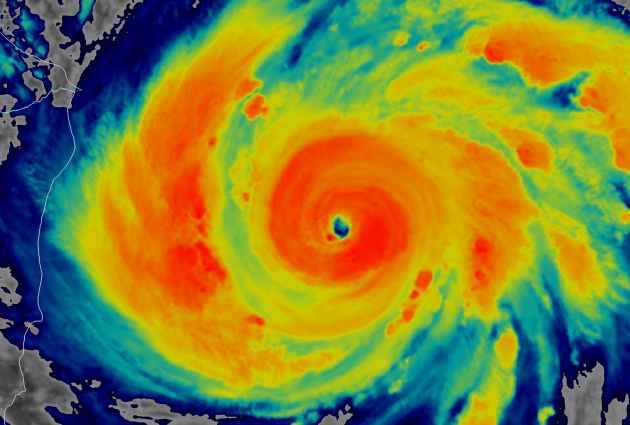 As of the last National Hurricane Center forecast, advisory 11, Hurricane Iota is a Category 2 hurricane with windspeeds of 105mph(170km/h) and a pressure of 960 millibars, and is still intensifying at incredible rates. The NHC still forecasts a major hurricane landfall in Nicaragua.

The storm is now approximately 24 hours from landfall, and some offshore portions of Nicaragua are already being affected. Synoptics ahead of the system are still extremely favorable, and are reflected by the current rapid intensification phase. Earlier, the NHC forecast Iota to rapidly intensify 40 knots in 24 hours, the fastest intensification they have ever forecast. Remember that very rapid intensification is not well captured by forecasts and models, so the system could very well be stronger than forecast. However, Iota now has a somewhat high intensity, so its intensification capabilities will be constrained by intensity caps. The SHIPS rapid intensification indices have the system’s maximum potential intensity near 160mph(255km/h), or minimal Category 5 intensity, so it very likely will not be stronger than that. However any major hurricane is still a major threat to the area, no matter what its actual intensity is, so stay on guard and do not relax “because it’s not a Category 5 hurricane”. The SHIPS-RII also still has a rather large percentage chance for rapid intensification in the near term, near 60% for a 30mph(50km/h) intensification in the next 24 hours. The outlook may also be a bit better than forecast due to the possible onset of eyewall replacement cycles weakening the system. However, there is no reason to count on such chance. Stay on guard.

An analysis of the internal structure of the system through microwave imagery shows a very healthy system with a distinct eye and strong eyewall. Furthermore, the outer bands of the system currently do not show any indications of forming into a second eyewall and incurring an eyewall replacement cycle. Still, much could change between now and landfall, so it may still happen. The strong eyewall signature implies a rapidly intensifying storm releasing surplus heat, which is what this graphic is showing.

Again, Iota’s impacts will be exacerbated by the fact that Eta made landfall in the same region less than 2 weeks prior, and could lead to a major humanitarian disaster. The wind field has also expanded according to the latest reconnaissance missions, so impacts will be more widespread. Some areas, such as Providencia, are already feeling significant impacts from the system.

Aside from that, Iota has become the 13th hurricane of the 2020 Atlantic Hurricane Season, only the second season with more than 12 hurricanes. It is still forecast to be a major hurricane, and as mentioned above, the rapid intensification forecast is also significant.

Check the National Hurricane Center for more information, and please listen to directed local information, as it will be more specific and useful. Hurricane Iota is a major threat to life and property, and that threat cannot be reasonably overstated. Evacuate from the impacted area if needed, stay tuned for updates, and most importantly, stay safe.