Nor’easter to Begin Lashing the Atlantic Coast Today, Break Down by State of What to Expect

By: James Summers
In: United States
With: 0 Comments 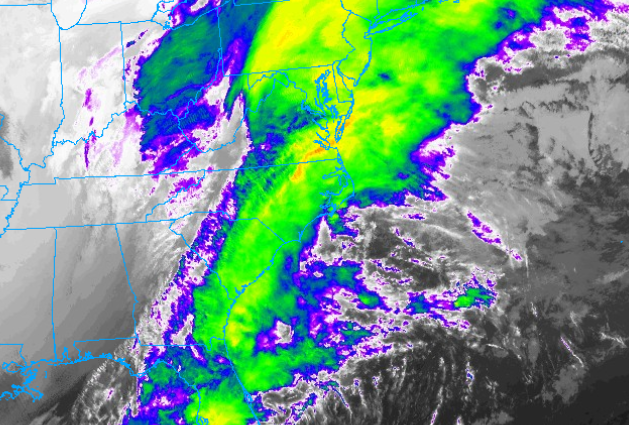 The event began as freezing rain and sleet falling over the Appalachian’s in Virginia in the early morning hours. During the late morning it rapidly changed to snow and greatly expand in size and intensity as a front and Low Pressure system interact with each other. The Low Pressure system will move Northeast along the US Coast and bring high winds to the coast and heavy snow further inland. Each state is going to be receiving different impacts from the storm and for this, a breakdown of what each state will get will be provided. Be prepared when this storm arrives and be read for extended time at home with potentially no power.

A wide range of impacts from severe weather to freezing rain to blizzard conditions are all possible with this nor’easter but the impacts will vary greatly between regions, so they have been broken down to what each state will experience. Only state’s where at least a Winter Weather Advisory is in effect as of writing this will be included.

Ohio will be at the edge of the heaviest snow but can still expect to see some impacts from this storm. Winter Weather Advisories are currently in effect for the Southern part of the state where a light glaze of ice and light snow totals can be expected, but this will likely expire by midday. Further east (mainly east of a line stretching from Columbus south to the Ohio River) higher snow accumulation of 4-6″ can be expected through the state where Winter Weather Advisories are in effect. This will make travel difficult as it will be heaving at times. Take extra caution when traveling.

The effects here will be isolated and minimal especially as the day wears on into the early afternoon. Most of the effects will be confined to Northeast Georgia and extreme Northwest South Carolina. These can expect up to a tenth of an inch of freezing rain but mainly in elevated areas. This will make especially slippery so caution should be used when driving on icy roads.

North Carolina will be divided on which areas receive what impacts. The western part of the state is under a Winter Weather Advisory as heavy ice accumulations up to a tenth are possible. in the Northern areas under a Winter Storm Warning, ice could be as high as a quarter of an inch causing tree damage and power outages. Snowfall will not be as high here, but up to 2″ can be expected in the Northern Appalachian’s.

On the Eastern side of the state, a Slight Risk for severe weather had been issued meaning scattered severe storms are possible. The Storm Prediction Center (SPC) states that as the front moves in, there won’t be very much instability but there will be lots of wind shear which will help organize the storms despite how little energy there is. Because of this environment, there is a chance that some supercells could form with the main hazards being tornadoes and gusty winds. This will last until about 6pm EST when the storms move out of the area and out to sea.

The snow will be confined to the Western part of the state with Winter Storm Warnings in effect while the Central part of the state has Winter Weather Advisories in effect. Most areas in the state will see max totals of 6″ which will mainly be seen in the Appalachian’s but totals of 8″ can be seen the closer to the West Virginia border. The highest totals of 8-18″ will occur in the far Northern part of the state which will cause power outages and some roof failure from the weight of the wet snow. The SPC issued Mesoscale Discussion #1852 stating that snow rates of 1-2.5″ are expected as the storm intensifies. Meanwhile East of this region, ice accumulations are possible over the central part of the state with total accumulations approaching a quarter of an inch, though isolated amounts up to a half an inch are possible which will cause severe damage to trees and powerlines.

Heavy precipitation is expected across the entire state. South of a Washington D.C. to Baltimore line, a Flood Watch is in effect as the precipitation here will generally be rain with up to 1″ possible in some regions. Winds will also be gusty here with some gusts approaching 40mph. The central area along the Washington D.C. to Baltimore line has a Winter Weather Advisory in effect as this area will be receiving a wintry mix. A quarter of an inch of ice is expected over this region, but this be completely hidden under the 1-3″ of snow expected across this area making it extra hazardous. The rest of the state North of the Washington D.C. to Baltimore line will be receiving heavy snow with the mot Western parts of the state expected to get up to 18″ of snow as a  Winter Storm Warning is in effect for this area. This amount of snow falling at such a rapid pace will make driving very difficult, if not impossible. The latest news on this can be found in Mesoscale Discussion #1854 issued by the SPC.

Delaware will be close to the center of the storm meaning most of the precipitation over the state will be rain with up to 1″ possible. Sleet is also possible but this will not accumulate. Winds across this area will also be gusting to 35mph which will blown around lite and unsecured items outside. A Winter Weather Advisory is in effect for New Castle county as 4-6″ of snow are possible in Wilmington.

The storm is expected to pass right off shore New Jersey and with it give New Jersey its highest winds. 25-40mph sustained winds are expected in the Southeast part of the state with gusts of up to 60mph. A High Wind Warning is in place for this region as with these winds, trees and powerlines can be blown down creating widespread power outages and some property damage. Driving will be very difficult, especially for larger vehicles and the winds will kick up a coastal inundation of 1-2 feet which will cause widespread flooding of coastal areas with some coastal roads becoming impassible. Structural damage will also occur to more flimsy buildings along the coast. However, in the Western part of the state there will be a sharp gradient of snow with Medford receiving less than an inch to Philadelphia receiving up to 8″. The northern part of the state will be hit the hardest as Winter Storm Warnings are in effect for this region. Over 8″ of snow is expected North of the bend in the state with some areas like Newark and Sussex receiving up to 18″. Wind gusts in this region could be as high as 40mph causing periods of blowing snow and severe drifts but also might develop into blizzard conditions.

Pennsylvania will be the epicenter of the event as with the exception of Erie County, the northwest part of the state is under a Winter Weather Advisory and the rest of the state is under a Winter Storm Warning. 18-24″ of snow are expected across the central part of the state with widespread 12-18″ across a large chunk of the area surrounding it including cities like Gettysburg, York, State College, Altoona, Clearfield, Bedford and Williamsport. Snow rates across this area are expected to be 2-3″ with periods of 4″ an hour. This will be hampered by winds gusting to over 20mph which will cause visibility to be less than 1/4 of a mile and sometimes 0. Driving will become impossible and roads impassible with them being quickly covered up by the high winds and fast snow rate even after they are plowed. Power outages will be widespread as the lines will not be able to support that much weight. Some roofs might collapse from the weight as well. On the WSSI Scale for rating winter storms, major to extreme impacts are expected over this area and will cause extreme disruption of life and widespread property damage.

The area in New York expected to be impacted by this nor’easter has been greatly expanded in size as now most of the state is under a Winter Storm Warning. Only counties close to Lake Erie and Ontario are not under any kind of winter alert. Across the central and Southern parts of the state, widespread totals 8-18″ are expected. Periods of blowing snow could develop further South as winds will gust to close to 30mph. Further south in the New York City region, 14-15″ are expected and with wind gusts around 35mph closer to the New York City region, blizzard conditions could develop. On Long Island, 9-14″ are expected over most of the island while only 4-8″ are expected on the Eastern part. Winds, however, will be gusting to around 45-50mph which could also cause blizzard conditions to develop

This entire area is under a blanket Winter Storm Warning as 8-18″ of snow are possible across all 3 states, but the highest amounts will occur in the western parts of the  region. Cape Cod is the only exception as 1-4″ can fall in that area. Winds will also be gusting at 20-25mph across Rhode Island and Connecticut with gusts up to 35-40mph along the southern coast and could lead to blizzard conditions here. Freezing fog will also be likely which will cause water droplets to freeze to trees, structures and also roads which will cause black ice to form in many areas and will lead to dangerous road conditions

Winter Storm Warnings are in effect for the Southern half of Vermont and New Hampshire as well as extreme Southern Maine. Winter Weather Advisories are also in effect for Central Vermont and New Hampshire and more South-Central Maine. 8-12″ of snow are expected in the Winter Storm Warning region with a further 4-8″ where the Advisories are. However 12-18″ are possible in Southern Vermont. Winds will also be gusting to 30mph in the South which will cause periods of blowing snow.

Stay tuned to your local National Weather Service for the latest information on these storms. Force Thirteen US will be doing a Live Stream on this event from 7pm-9pm EST on their YouTube Channel covering the nor’easter and all questions about the event can be answered there. Persons that will be impacted by this event should do not go outside unless absolutely necessary. Be prepared for extended periods of time with no power and having businesses shut down. Listen to local authorities and please, be safe.

2020-12-16
Previous Post: Winter Storm Warnings Issued for Mid-Atlantic States Ahead of Nor’easter While it Lashes the Central Great Plains
Next Post: Cyclone Yasa Weakens Slightly To A Category 4, Still A Dangerous Storm