By: Force Thirteen
In: United States, World News
With: 0 Comments 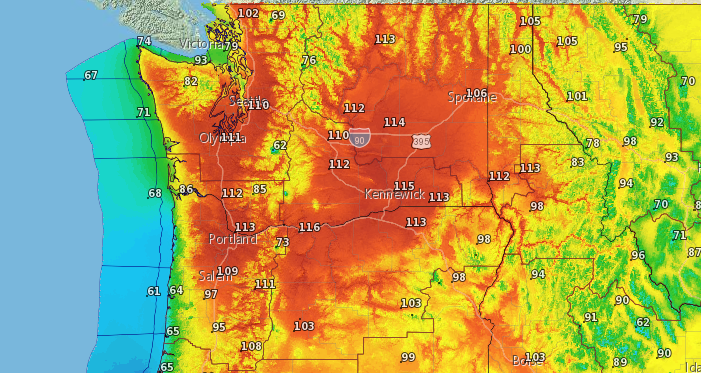 A massive heatwave effecting Canada and the Pacific Northwest could set a new record for the highest temperature ever recorded in Canada. The old record was set on July 5, 1937 in the towns of Midale and Yellow Grass, both in Saskatchewan at 45°C. Environment and Climate Change Canada senior climatologist Dave Phillips says it’s quite possible that this 84-year-old record will be “annihilated” in B.C. this week with some locations in British Columbia have forecast highs of 46-47°C.

The town of Lytton, British Columbia has recorded temperature of 43.8°C Saturday and 46.6°C Sunday, surpassing the old record that was set in 1992 at 39.9°C. Nearby town of Lillooet recorded a high of 43.1° surpassing the record set in 1925 at 40.0°C. Cache Creek Area recorded 42.5°C, far higher than previous record of 36.9°C set in 2015. A total of 69 stations around the country recorded new record-high temperature as of Sunday, with most located in Alberta and British Columbia. As of Sunday afternoon, nearly all of B.C. and Alberta were under heat warnings. Parts of northern Saskatchewan and pockets of Yukon, Northwest Territories, Quebec, New Brunswick, and Ontario were also under heat warnings. Some relief is expected later into the week as a cold front moves into B.C. with most areas expected to have temperature in mid-20s to low 30s.

By late Sunday afternoon, several school districts across the Lower Mainland and on Vancouver Island announced that schools would close for at least Monday. “The heat that we are experiencing is unprecedented and with this in mind, the District has put plans in place to ensure the health and safety of staff and students,” said a letter from Vancouver School Board Superintendent Suzanne Hoffman. Municipalities and districts across B.C. have opened cooling centers for those who don’t have air conditioning.

Farther south in Portland, Oregon, the hottest day ever recorded occurred on Saturday, where temperatures topped 108°F (39.4°C). The previous record for Oregon’s largest city was 107°F (41.7°C), set in 1965 and 1981. Seattle reached 101°F (42.2°C) on Saturday, making it the hottest June day ever recorded in the city. It was only the fourth time in recorded history that Seattle has topped 100 degrees, according to the National Weather Service.

The US NWS has said the heat wave “will likely be one of the most extreme in recorded history” for parts of the region, as people are warned to take precautions against “life threatening” heat. All of Washington and Oregon, and parts of Idaho, Wyoming and California, are under an excessive heat warning. There were reports of stores across the region running out of fans and air conditioners.

Agriculture and wildlife conservation across the Pacific Northwest have also been impacted. Berry farmers scrambled to pick crops before they rotted on the vine. Fisheries managers working to keep endangered sockeye salmon safe from warming river water. State, tribal and federal officials began releasing the water from Idaho’s Dworshak Reservoir earlier this week into the lower Snake River in a bid to lower the water temperature. Officials fear a repeat of 2015, when water temperatures in Columbia and Snake river reservoirs reached lethal levels for the salmon.

Article written by Justine, formatted and revised by Preston Schenk