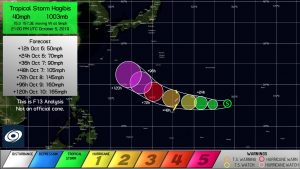 …FORECAST TO BECOME A SUPER TYPHOON…

A Typhoon Watch has been issued for Alamagan in the northern CNMI.

Typhoon conditions, including destructive winds of 74 mph or more,

are possible within 48 hours, around Monday evening.

A Tropical Storm Watch has been issued for Rota, Tinian and Saipan

in the CNMI, and for Pagan and Agrihan in the northern CNMI. Tropical

storm conditions, including damaging winds of 39 mph or more, remain

possible within 48 hours, around Monday afternoon.

Tropical Storm 20W (Hagibis) located to the east of Guam is continuing to strengthen as expected, and has now been upgraded to a Tropical Storm, and named Hagibis, the 19th named storm of the 2019 Pacific Typhoon Season. Satellite imagery indicates that the system continues to become better organized with flaring deep convection above the much better defined low level circulation center. The current intensity estimate of 35kts (40mph) is based on a 1800UTC PGTW T2.5 (35kts) Dvorak Fix, and is supported by the continued strengthening trend. The cyclone is tracking to the west along the southern periphery of a deep layered subtropical ridge to the north. The westward motion should continue for around 48 hours and then the system should turn more west-northwest until around 72 hours when the system should turn more to the northwest and continue that motion over the forecast period. The track forecast is in between the GFS and ECMWF model, which is more west at the end of the forecast period. The models are in great agreement through 72-96 hours, but then diverge afterwards. Overall the forecast track has good confidence. The environment is exceptionally favorable with low wind shear of 5-10knots and robust radial upper level outflow with very warm sea surface temperature of 29-30C with high ocean heat content levels and models are very aggressive on intensification after 48-72 hours as poleward outflow improves even more ahead of a trough interaction. Due to these extremely favorable factors, there is not really an impeding factor to prevent Hagibis from becoming a Category 5 Super Typhoon. Based on aggression of the global models, and the well respected ECMWF in general which takes the powerful system to 900mb, Hagibis is forecasted to reach a peak intensity of 145kts in 96 hours and maintain that intensity through hour 120, and depending on eye wall replacement cycles, it is possible the forecasted intensity is conservative. The intensity forecast overall has higher confidence and follows closely to the ECMWF model.

Hagibis is forecasted to be passing through the Marianas islands in 48 hours as a major typhoon, possibly even stronger than expected. It is important for residents to closely monitor the system and refer to NWS Guam for official data.

It is too soon to determine what happens after 120 hours, but anywhere from Taiwan to Japan needs to be on alert and closely watch the system, especially Japan, which models have trended closer to as of recently. 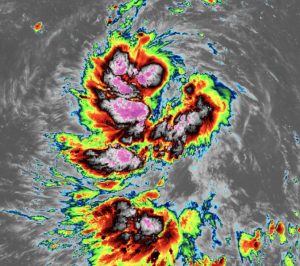 Next complete advisory to be issued at 0300UTC