Cyclone Kenneth has been rapidly intensifying throughout the day today, and has just reached Category 3 intensity on the Saffir-Simpson Scale according to the JTWC. Meteo-France puts Kenneth as a tropical cyclone with 10-minute winds of 100 mph, or 155 km/h – very close to becoming the 10th intense tropical cyclone of the season. The latest position of the storm is estimated to be 11.3 South, 42.9 East, which puts it extremely close to the Comoros Islands, with the northwesternmost one being in the eyewall. The storm had a pressure of 948 millibars as reported by the JTWC, 965 mb by Meteo-France. Kenneth is also moving to the West Southwest at around 11 miles per hour.

Kenneth is a Stage 5 on the CDPS scale, with the main contributor being rainfall, with 600 millimeters forecasted in Mozambique. The JTWC is forecasting a peak of 125 mph in 12 hours, before making a landfall with an intensity around 115 miles per hour, though the storm could be lower – or higher – than that forecast. The HWRF model calls for Kenneth to reach an intensity of 130 knots, or 150 mph. Other models calling for slightly more, some less. 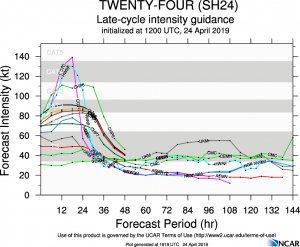 As Kenneth nears the coast of Mozambique, stay informed by your local media outlets, and check Force Thirteen’s various Social Media platforms for any announcements on livestreams that are going to occur.