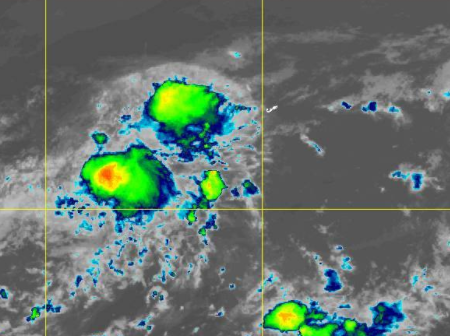 Tropical Depression Five has developed this morning in the Atlantic, with winds of 35mph and a pressure of 1009mb, becoming the fifth tropical depression in the Atlantic in 2020. The storm was located at 31.1N and 68.7W as of 11AM EDT this morning. The system is expected to intensify into a weak tropical storm later today, with a peak strength of 45mph. If the system intensifies into a tropical storm, it would receive the name Edouard. Thankfully, no major land impacts look likely from this system- however, minor impacts such as flooding and brief gusty winds are possible on the Island of Bermuda. The storm wasn’t previously expected to become a tropical cyclone before yesterday, when a special update was issued by the National Hurricane Center. Although no major impacts look likely, rough seas and heavy rain are almost a certainty. The storm will move to the north and east, before turning extra-tropical early this week.