The tropical wave and associated area of low pressure over the central tropical Atlantic Ocean (designated Invest 95L by the United States Navy), has become better defined today, and now meets the criteria to be classified as the newest tropical cyclone of the 2020 Atlantic hurricane season. It is the eleventh tropical cyclone of the season and the first in the month of August. Currently located over the open Atlantic, Tropical Depression Eleven is forecast to gradually strengthen over the next few days as it moves westward, likely passing near the northern Leeward Islands later this week. The depression is expected to become a tropical storm by Thursday morning, and if it does so, it would receive the name Josephine, which is the next name on this year’s predetermined list of tropical cyclone names. 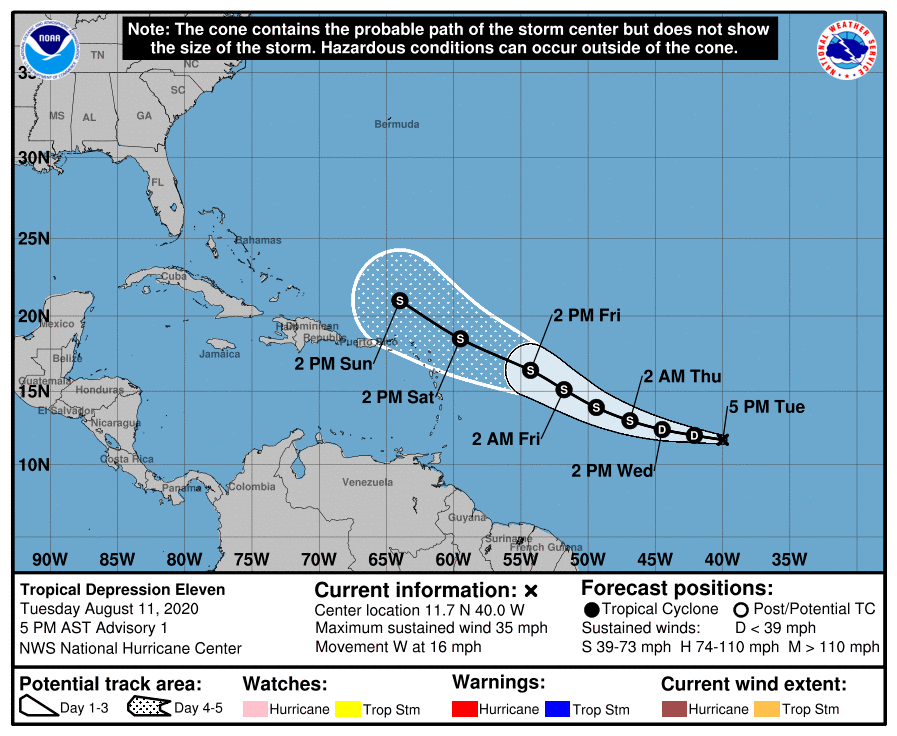 As of the National Hurricane Center’s most recent advisory at 5:00 PM AST (21:00 UTC), the center of Tropical Depression Eleven was located near 11.7°N, 40.0°W, about 1110 mi (1790 km) west-southwest of the Cabo Verde Islands, and about 1450 mi (2335 km) east of the Lesser Antilles. Maximum sustained winds are near 35 mph (55 km/h) with gusts to 45 mph (75 km/h), and the minimum central pressure is 1007 mb (29.74 inches). The depression is moving toward the west at around 16 mph (26 km/h), and a generally westward motion is expected to continue through Wednesday. By Wednesday night, a west-northwestward motion at about the same forward speed is expected to begin, and continue through the rest of the week. On the NHC’s forecast track, the depression will be passing north of the Lesser Antilles on Saturday. Gradual strengthening is forecast through the next few days as environmental conditions are expected to be conducive for further strengthening, and the depression is expected to become a tropical storm on Thursday. Continued strengthening is forecast through Friday, with weakening expected to begin by Saturday as conditions become less favorable.