Saudel peaked as a typhoon with maximum 10-minute sustain winds of 140km/h and minimum central pressure of 965hPa. With a wave of northeast monsoon moving south, it gave shear and abundant amount of dry air such that Saudel weakened substantially, now to a severe tropical storm status. Following after Saudel, tropical depression 21W (Philippine name: Quinta) has formed east of the Philippines, imposing threat again to the Philippines and Vietnam. 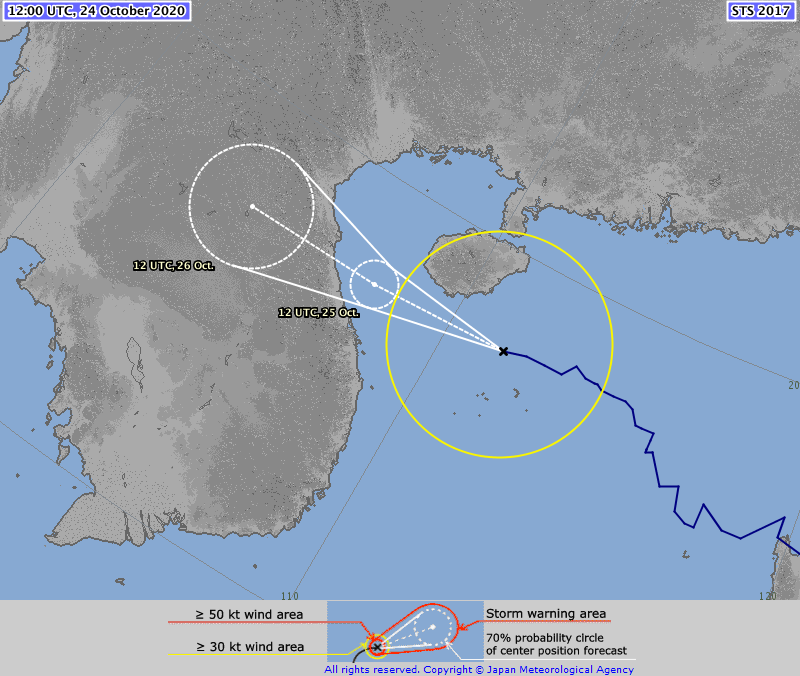 As of 20:00 China standard time (12:00UTC), according to latest Japan Meteorological
Agency (JMA) advisory, it is located at 17.7N 111.5E, and has maximum 10-minute sustain
winds of 25m/s. with minimum central pressure of 990hPa. However, the northern reef of
Xisha Islands has recorded maximum 10-minute sustain of 28.1m/s (101.16km/h) from
west-northwest, within 10m range, which means Saudel’s intensity is higher than what JMA
gives. From China Meteorological Administration (CMA) advisory at 21:00 China standard
time, it has 2-minute sustain wind of 28m/s with minimum central pressure of 985hPa. It’s
expected to move westward at around 15km/h and continues to weaken with decreasing
sea surface temperature, dry air and increasing wind shear environment due to northeast
monsoon influence, and expected to make landfall at north central coast of Vietnam on 26th
October midnight, as a mere tropical storm. Level 3 warning of natural disaster risk is now in
affect in Vietnam, and yellow typhoon warning is in affect for east and southern areas of
Hainan Province, China, while blue typhoon warning is in affect for other areas of Hainan.
In Vietnam it’s expected that 2 to 4 meters wave will be produced as Saudel approaches,
bringing strong wind to impact area. Worse still, total rainfall of 50-150mm is also predicted
to be dumped from 24th to 26th October, deteriorating the situation of flooding of Vietnam
in recent days. 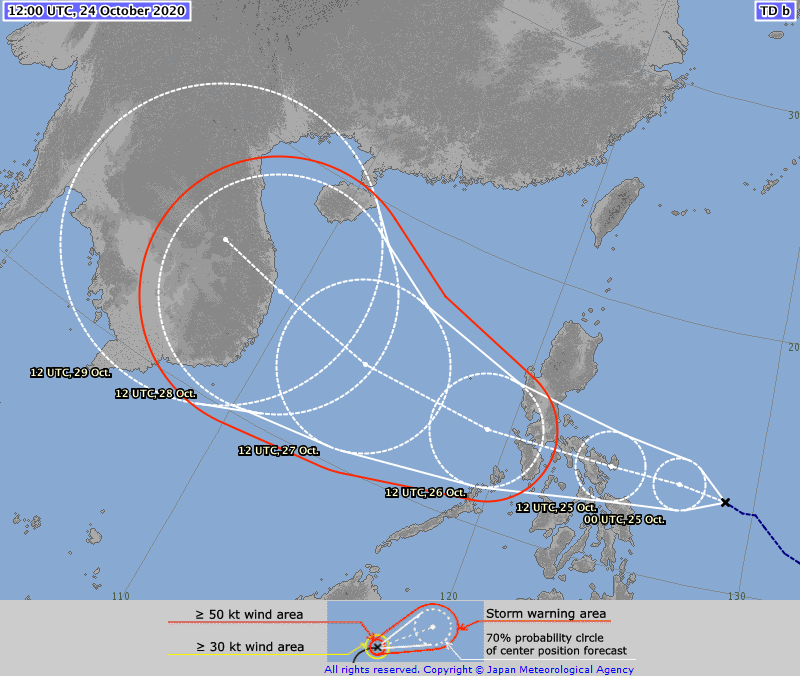 As of 20:00 Philippine time, according to latest advisory from JMA, 21W is located at 13.3N
128.8E, and has winds of 15m/s and pressure of 1004hPa, moving west at 25km/h. It is
expected to impact the Philippines as a tropical storm as a tropical storm from tomorrow
night, then enter to South China Sea and intensify further to a typhoon and impact Vietnam,
just around 4 days after Saudel’s struck.
Currently signal 1 warning is in affect for Luzon, Visayas and Mindanao, which means Winds
of 30-60 km/h may be expected in at least 36 hours or intermittent rains may be expected
within 36 hours.