Hurricane Epsilon turned post-tropical early this morning, and is already halfway through its Atlantic ocean crossing. Epsilon is now a huge extratropical cyclone however, and has triggered wind watches for southern Iceland. 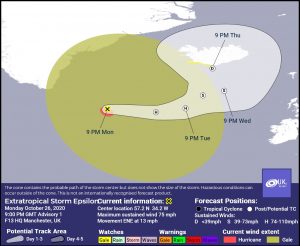 As depicted in this recent graphic by Force Thirteen UK and Ireland, Epsilon has an enormous wind field with some hurricane force winds near the center on the southern side. This area is expected to expand overnight with the storm peaking with around 90mph winds on Tuesday morning.

Thankfully, the storm will shrink and weaken substantially before getting close to land, with the strongest gales remaining well out to sea. However, Iceland, the Republic of Ireland, and parts of the United Kingdom could experience some gale force winds and general disruption.

The storm is expected to land in Iceland late Thursday evening as it dissipates.