Accumulated Cyclone Energy (ACE) is one of the truest indicators of cyclone activity in any particular year, as it uses a formula to calculate energy produced by all tropical cyclones for every six hour period. This means that long-lived storms, even if they aren’t as strong, get better recognition and weight when being measured for ACE. In the past year, we have conducted an extensive effort to backdate ACE totals for each basin throughout the last 50 years or more depending by basin. One of the reasons we’re so determined to plot this data is so that we can properly compare this year’s feats “pound for pound” as it where. For instance, it’s not much of a secret that despite a nigh record-breaking Atlantic hurricane season in terms of named storms, it’s still got a way to go before flattening the record for Accumulated Cyclone Energy. 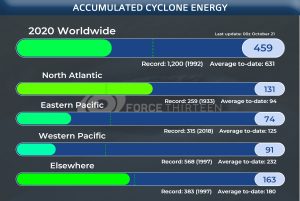 Here is our chart for this year so far (as of October 21), depicting a worldwide total of 459 ACE points.

What’s particularly striking about this year is that the Pacific has been massively suppressed which – unless we see a blockbuster end to the year – will slump to the lowest levels seen since at least 1977. Conversely, the Atlantic is booming, with well above average ACE, but still barely over half of the record set in 1933. Elsewhere – that is to say – the Indian Ocean and the Southern Hemisphere, conditions have been fairly normal.

So where has all the ACE gone? The simple answer is that worldwide ACE tends to slump during busy Atlantic hurricane seasons and La Nina events, because the Pacific harbours the majority of storms and its misfirings have a greater impact than an inactive Atlantic hurricane season would. Nonetheless, in 2020 this appears to have been much more amplified, with the Western Pacific seeing less than half the average cyclone energy for the year to date, meaning that there is now a real chance that we are witnessing the quietest Pacific typhoon season in terms of cyclone energy since before 1945.

But it’s not time to get complacent! With computer models picking up on Western Pacific activity through early November, the ACE could be recouped very easily with a couple of intense or longer lasting typhoons.

In an average season, five typhoons form after this date.