Tropical Storm Vamco has been intensifying in the last few hours, and satellite presentation of it shows the storm is continuing to organize itself.

Vamco is located near 13.3 degrees north, 128.5 degrees east, approximately 444 nautical miles east of Manila in the Philippines. The storm has a maximum sustained winds of 40mph (75 km/h) and a minimum pressure of 1002 millibars. The storm is currently moving at 11 knots, and the storm’s size is huge. Vamco is forecast to intensify further and make landfall in Luzon as a strong category 2 typhoon and pass to the south of the capital, Manila, while approaching Vietnam in the long forecast.

The Philippines’ local agency, PAGASA (Philippine Atmospheric, Geophysical, and Astronomical Services Administration) has already issued warnings for parts of the country. PAGASA also expects that as Vamco (locally named Ulysses) approaches Luzon, a signal #3 is possible to be hoisted in the island. 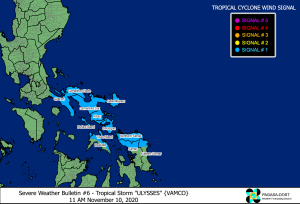