Typhoon Vamco continues to intensify despite its closeness to the Philippine landmass, and impacts of the storm should be felt later tonight or tomorrow morning Philippine time.

Vamco is located near 14.6 degrees north, 123.4 degrees east, approximately 139 nautical miles east of Manila, Philippines. The storm has a maximum sustained winds of 90 mph (150 km/h), sustained gusts of 115 mph (185 km/h), and a minimum pressure of 975 millibars. The storm is currently going westwards at 12 knots (12 mph) and is a CDPS stage 8 for the country, as it is expected to make landfall at 115 mph (185 km/h) with rainfall as its primary threat, per Force Thirteen’s estimates. The Joint Typhoon Warning Center (JTWC) expects the intensification to continue right before landfall, and is forecasting a peak of 100-105 mph (155-165 km/h) in just under 6 hours. 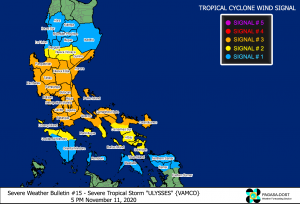 Please prepare immediately from this storm as rainfall totals have even reached as high as 200 mm in other areas. Please evacuate if forced to, and keep updated with your local agencies. Stay tune for updates.