As the day of the Nor’easter looms nearer, greater congruency has come together for what to expect as weather alerts now stretch from Georgia up along the Appalachian Mountains to New York and Massachusetts. Snow is already falling in Oklahoma as a result from this storm and Heavy snowfall, high winds, blizzard conditions, sleet, freezing rain, flooding and severe weather can be expected with this storm as it will ravage the Mid-Atlantic Coast Wednesday and Thursday.

The storm system seems to be currently located over Oklahoma as recent reports from there indicate that heavy snow is present. However, the storms influence is quite large as areas as far North as Nebraska are reporting snow as a result. Winter Weather Advisory’s are in effect for Northern Texas, much of Central and Western Oklahoma, Western Kansas, Southwestern Colorado and Southern Nebraska with a Winter Storm Warning in effect for West-Central Oklahoma as 4-6″ with isolated amounts up to 8″ can be expected there. These are likely to expire by Wednesday morning as the storms move out of the area, but a further 1″ can be expected in Western Kansas before tapering off by the early evening and 1-2″ can fall in Central Kansas as the storm moves Northeast. This, however, is just the birth pains of the event. Far worse conditions are expected as it moves generally East in these coming days.

The forecast remains virtually unchanged. The snow with this system will lighten up and move out of the region around 2am EST as a low pressure system pulls it northward to over the Ohio River Valley region. Here light snow accumulations can be expected overnight as the system continues to move East. A long cold front will have attached itself to the low as well and will be stretching from the Ohio River Valley to the Gulf Coast brining showers and thunderstorms with it as it rapidly moves East across the country. Meanwhile a Low Pressure system will begin to form off coast of Georgia and begin to slowly move Northward and by 7am EST will be centered off of the South Carolina Coast.

By around 11am EST the two systems will collide and a rapid development of heavy snow will occur starting over the Appalachian Mountains in Virginia around 9am EST and exploding in area to where snow will be felt from Ohio across into the Northern Virginia’s and into most of Pennsylvania as the low pressure system over North Carolina now begins to absorb the front and trump the other system over the Ohio River Valley. By around 3-4pm EST the Low Pressure system over North Carolina will change directions from North to Northeast and begin to absorb the cold front and the energy from the former system over the Ohio River. These two systems combined energy will cause heavy snow over mainly Pennsylvania as the system begins to move up the Mid-Atlantic coast in the late evening hours. By the early morning hours around 7am EST on Thursday, the storm will continue Northeastward and be delivering snow to much of the New England area. However by noon time the storm will have mostly moved out of the area.

A wide range of impacts can be expected with this storm and they will be more widespread than previously anticipated. Starting with the Southeast, impacts will generally be limited to Northeast Georgia and extreme Western South Carolina where freezing rain up to a tenth of an inch with a mix of sleet and snow can be expected. This will make roads and sidewalks especially slippery meaning extra caution should be used during the morning commute.

North Carolina will once again be split down the middle. A Winter Weather Advisory is in effect for the Western and Northern parts of the state and a Winter Storm Warning is in effect for the extreme Northwestern part of the state as freezing rain is likely in the Western areas where widespread accumulation of up to a tenth of an inch are possible with some areas in the Northeast potentially receiving up to a quarter of an inch which will cause tree damage and spotty power outages. On the West side along the coast a Marginal Risk for severe weather remains in place meaning isolated severe storms are possible. The thought is that ahead of the Low Pressure system in the Gulf Stream, there is a limited window for enough destabilization to occur that will allow isolated supercells with the chance of severe wind gusts and tornadoes to occur before the front arrives and shuts this activity down. The uncertainty is how long this window will be for the larger the window, the more amount of destabilization that can occur meaning the more widespread event. The Storm Prediction center stated they will continue to monitor this region and may upgrade to a Slight Risk for severe weather tomorrow meaning scatter severe storms would be possible.

The most impacted areas are still forecasted to be the Mid-Atlantic and the New England region as Winter Storm Warnings are in effect for Western Virginia, Eastern West Virginia, Western and Central Maryland, almost all of Pennsylvania, Northern New Jersey, Southern New York including New York City, Connecticut, and most of Rhode Island and Massachusetts. Winter Weather Advisory’s are also in effect for Extreme Western and Central Virginia, Central West Virginia, Eastern Ohio, Northwestern Pennsylvania, Washington D.C., Central Maryland, Northern Delaware and Southwestern New Jersey and a Winter Storm Watch is in effect for Central New York, Southern Vermont and New Hampshire, Extreme Southeast Maine and Southern Rhode Island and Massachusetts. Virginia and West Virginia are going to get a wintry mix in the lower altitudes of the Appalachians with it starting as snow Tuesday Night and then switch to mostly rain during the day on Wednesday and then switch back to snow that night. Higher elevations will most likely have it be all snow. Maryland will be a mix of it all with the Western portions receiving 2″ of rain while the central regions will receive 4-8″ of snow and up to a tenth of an inch of ice and the Western area being the hardest hit with upwards of 18″ of snow being expected. 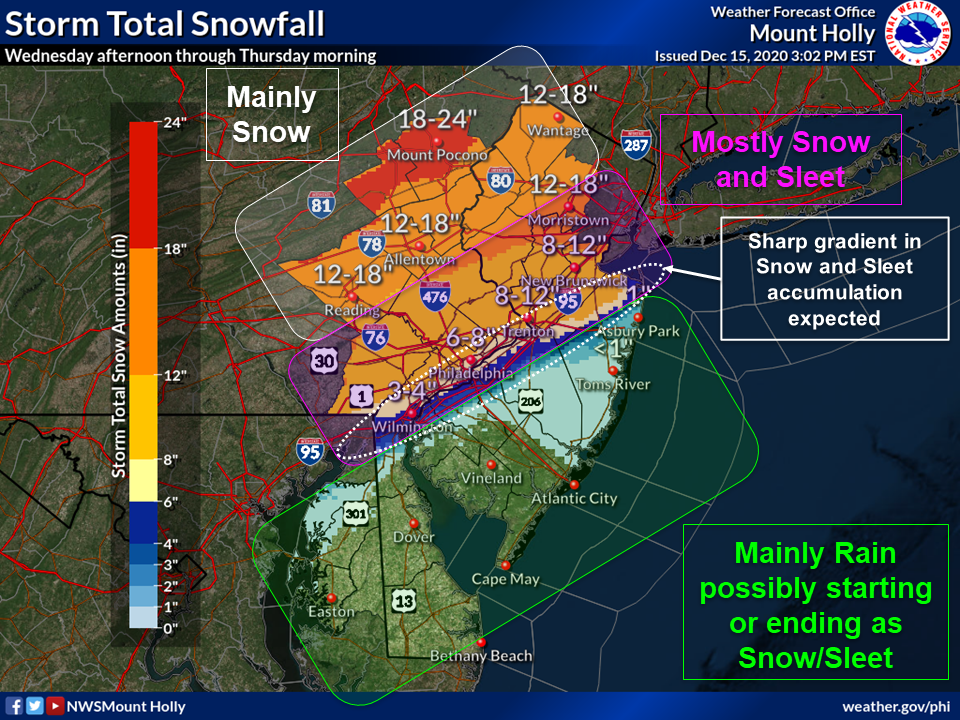 Along the coasts of Delaware and New Jersey, the storm will be mostly rain with over 2″ of rain possible and as the center of the storm makes its closest pass here, wind gusts of 50mph are possible which will cause 1-2′ of inundation along the coast causing some coastal flooding. However, Pennsylvania will receive the brunt of the storm as over 2 feet of snow with isolated amounts up to 30″ are possible in some areas including the cities of Gettysburg, York and Pottsville. At least 1 foot is possible over much of the state, mainly east of a Somerset to Clearfield to Wellsboro line. Southern New York will see widespread amounts of 14″ with Long Island seeing 11-12″ on the West side to 2″ on the east side but with more windy conditions with 45mph wind gusts creating rough sees. the Southern New England area will be seeing 12-18″ in Western Connecticut but widespread 8-12″ across the rest of the region.

Impacts are going to be devastating from this storm. Widespread freezing rain will cause slippery road conditions making traveling very difficult. Areas with a quarter of an inch of ice can have scattered tree damage and power outages from the weight of the ice on the branches and power lines. This will become especially dangerous if an inch of snow falls making the ice beneath completely invisible and very dangerous to those who walk on it. Up to 2″ of rain is also possible in Southern Maryland which may cause isolated flooding of low lying areas. Gusty winds along the coast from Delaware to Long Island will also cause power outages and broken tree branches and will cause large waves to form which will cause inundation up to 2′ inland making some roads impassible in low lying areas along the coast and may cause some structural damage. In the epicenter of the event, heavy snow will cause snow rates of up to 4″ an hour which will make driving extremely dangerous, if not impossible. this will be hampered by 25mph wind gusts which will cause several periods of blowing snow and may cause it to blow back on roads previously plowed making then impassible. Spotty power outages and some roof collapse will also be possible as the weight of the snow becomes too much for the lines and roofs. Along the New England coast winds gusting to over 35mph may create blizzard conditions when combined with the heavy snow rate of 2-3″ an hour. The Weather Prediction Center stated that Moderate-Major impacts from this nor’easter are expected across the Northeast meaning life threatening conditions and large amounts of property damage are expected.

When this storm arrives, do not go outside and stay indoors. If you MUST go outside, wear layers, cover up all exposed skin and keep your body moving to stay warm. Go to weather.gov/safety/winter for more information on how to stay safe during winter weather. Consult your local authorities and the National Weather Service for the latest information. Watch the Force Thirteen US Twitter page and YouTube channel for the latest information on this storm. Be prepared and most importantly, be safe when this storm comes.