After weeks of above average temperatures and rainy weather in large parts of Europe the winter is finally coming to knock on the door.
By next weeked, the storm Bella is forecasted to affect the UK and possible the Netherlands. Bringing gusty winds.
This is all happening after a cold front slowly passes over the Netherlands, causing a shift in the wind direction from southwest to north. Bringing cooler air down to northwestern Europe, especially Germany and the Benelux. The coming days are still forecasted to have a slight soutwesterly flow for big parts of Europe.

As a cold front is passing over Germany, The Benelux and parts of France, rain is brought with it in the boundary zone between the warmer air and the cold northerly air. In some places there already has fallen more than 25mm of rain. Once the front passes over the wind can suddenly change in direction. Once the cold air starts to really gain terrain the temperate can drop multiple degrees celcius an hour. After the midnight the wind can pick up quite quickly in the Benelux, UK and France. Bringing gusts from 60-90 km/h. Once the winds become northerly, colder air is blown in very fast. Storm Bella is forecasted to arrive this weekend. 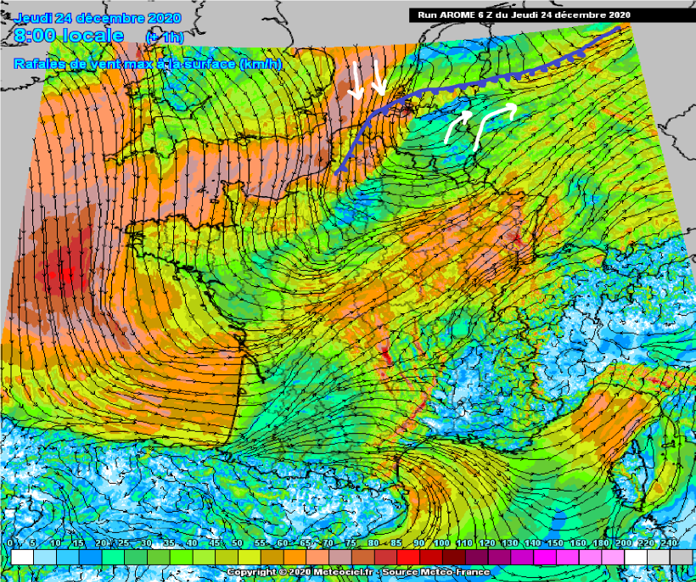 Storm Bella, which is currently located over Iceland should bring polar air down to big parts of Europe. The Northwest of Europe, Northeast and Alps are likely to get some form of sleet. Due to a Greenland blockade, which is forecasted to form as suggested by the weathermodels for the past two weeks. This causes a low pressure area to drop down from the Polar Vortex. This low has been named Bella by the Met Office. The storm is forecasted to impact the UK and Beneleux with storm force. This low-pressure system causes the polar air to be drawn from Scandinavia. This should allow for some serious cooling in the lower 400m. The ECM weathermodel forecasts Bella to reach 975 hPa at her core. GFS goes deeper and shows 970 hPa is possible in the core of this system. The ridge, which is currently located over the North Atlantic is expanding and attempting to reach Greenland and form a very strong blockade. This blockade causes some serious warming in the Stratospheric Polar Vortex (SPV), which in turn can trigger a Sudden Stratospheric Warming. This ssw suggests a stronger winter is possible starting in January. Once this blockade forms over Greenland, it will bring a northeasterly airflow. Bringing polar air from the North Pole with it. As Bella drops down towards Europe, the models show warm air from the southwest going up towards the northeast over Russia. Warming up the “Russian Bear” we all want so badly in Europe. If this blockade settles well, we could be looking at long term winter weather with possibly a lot of snow in the lower area’s.

In Scandinavia, the storm Bella, which is currently situated over Iceland, is forecasted to bring a lot of snowfall and a white Christmas for many. The airflow here is moist and polar, changing rainshowers into snowshowers. Some slight thunderstorm activity is possible as a few cold- and occludedfronts pass over. Only bringing more precipitation in the form of hail and snow. The winds will come from the north/northeast, bringing more snow with it A white Christmas is to be expected in large parts of Scandinavia. This area of Europe is the one with the jackpot this December, getting loads of snow in a short period of time. Perfect if you like the winter and snow. If you have children, it would be a beautiful time for them to see a white Christmas for Scandinavia. It is usual for the time of year to have slightly warmer than average temperatures in both Scandinavia and Europe. For this year it has been the warmest November on record in Europe.

For Northeastern Europe a slight polar airflow comes in from Bella from the southwest, but nothing much. The ECM weathermodel forecasts a slight subtropical airflow into parts of North- and South- eastern Europe. Bringing softer conditions than usual. 1-6cm of snow is possible somewhere in the next week. As an occluded front passes over with convective activity snowfall is possible in some area’s. Northeastern Europe could deal with strong winds and colder weather the coming days before having a rise in temperature because of Southwesterlies. But once Bella comes in it should cool again in the Northeastern parts of Europe. Whilst the East keeps getting more subtropical air from the southwest. Around Russia’s border more than 6cm is possible, if the temperatures are cold enough with enough precipitation. This is because of the subtropical air collides with the polar air. This massive difference in temperature could create instability in the area with a lot of rain in the forecast. A white Christmas is not forecasted for this area. By next week it could even be warmer than this week, due to the airflow changing from cold and west, to warm and southwest. Small depressions forming from the parent low could bring snow from time to time.