Extremely Dangerous Severe Weather Pattern Over the US Today and Tomorrow

By: Force Thirteen
In: Severe Weather, United States
With: 0 Comments 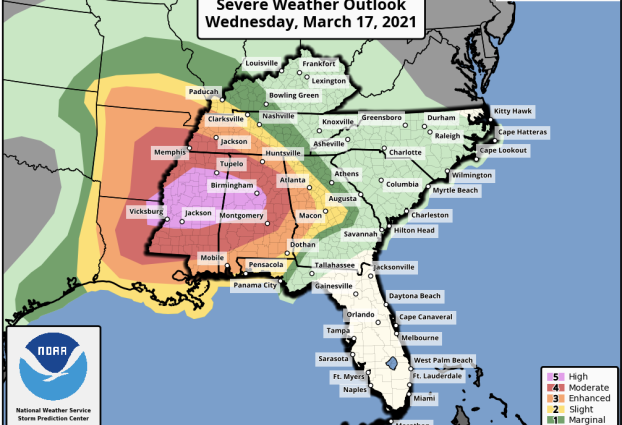 In the early hours of Wednesday, March 17th, 2021, the SPC issued a high risk for parts of Mississippi, Alabama, Louisiana, and Arkansas, including the major population centers of Birmingham, AL, Jackson MS, and Greenville, AL. Moderate risk has been issued for a massive area around the high risk, and further risk levels extend beyond that, as shown in the featured image. Understand that this is a very unstable atmosphere and a very dangerous situation which may warrant multiple PDS Tornado Watches from the SPC. Be on alert for any threats during the day and into the overnight hours Wednesday. Furthermore, there is a day 2 Moderate risk from the SPC over the Carolinas and Georgia, including the population centers of Raleigh, NC, Charlotte, NC, Savannah, GA, and Charleston, SC.

During the day 1 period, the weather setup will be extremely dangerous. Already, there is an initial line of supercells about to move through northern AR, MS, and AL. Afterwards, it is expected that groups of potentially intense supercells will appear through the moderate risk area, producing inclement conditions throughout the entire day. Finally, another line of supercells, this time potentially extreme, will move NE through Louisiana, Mississippi, and Alabama. Models show that the second and third sets of supercells may be especially severe, and especially the third, which has the potential to produce an outbreak of violent tornadoes. In fact, both the NAM and HRRR, the high resolution models, show this third line of supercells producing an extreme tornado threat. Throughout the day the situation may change, and it already has. Clearing of the cloud cover over the affected sector has already occurred far earlier than predicted, which means the event may be significantly worse than forecast.

Do not let your guard down during today, as it is an extremely dangerous situation that could produce significant tornadic threats to areas throughout the moderate risk at any time. Remember that, tomorrow, there is significant severe weather threat for the Carolinas and Georgia, and one should be prepared for both severe weather events if needed by this point. All preparations should be rushed to completion, and keep yourself updated with local weather information. Remember to check your local NWS and the SPC for further updates on the situation.

2021-03-17
Previous Post: Dangerous Severe Weather Threat for the United States as The SPC issues a Moderate Risk
Next Post: WMO announces retired names, ends the use of Greek Alphabet