In a surprising turn of events, Typhoon Surigae has strengthened much faster than anticipated as it jumped 2 category’s in 12 hours to become the first category 4 typhoon of the 2021 Northern Hemisphere season. Further strengthening is anticipated but there is a large spread in models in what course the storm will take. Regardless, persons along the whole East coast of The Philippines should take the necessary steps to prepare for the storm. 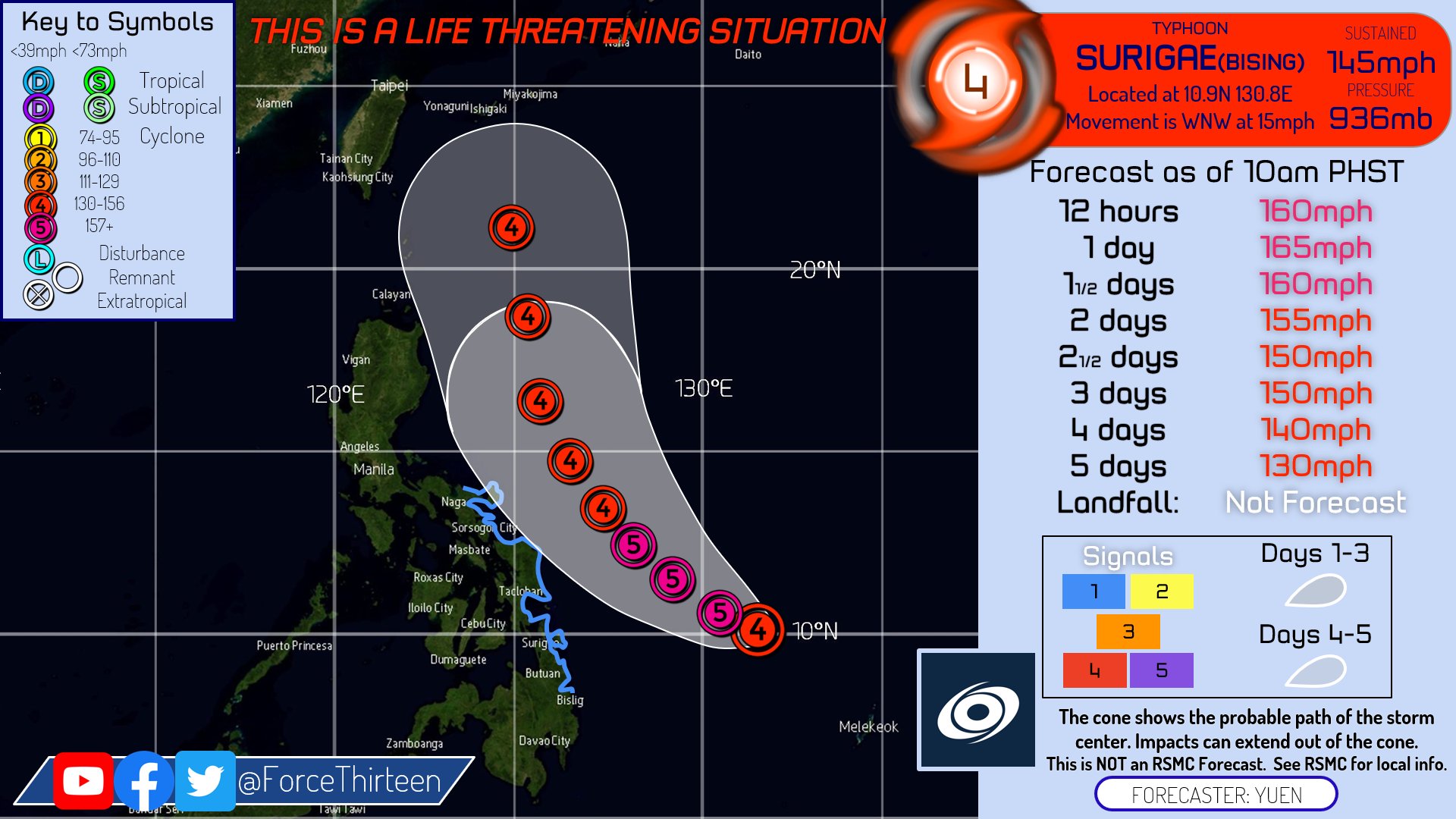 As for 11am PHT (11pm EDT), Surigae was located at 10.9N 130.8E or about 544km (338mi) from Bising or about 549km (341mi) from Surigao both of which are on Mindanao Island. Winds are estimated to be at 233kph (145mph) making it a powerful category 4 hurricane with a pressure of 936mb moving WNW at 24kph (15mph). This storm was actually not expected to intensify this quickly as yesterday at this time the storm was expected to be a category 2 in 24 hours but it has since exploded in intensity becoming a category 2 12 hours later and steam rolling for the next 12 hours to becoming a category 4. Further strengthening is expected and this storm will likely become a Super Typhoon with in next few days. After this the storm is expected to slow down in speed and intensity before moving to the Northeast and losing tropical characteristics.

Models are in strong disagreement of what this storm will do. The GFS has the most central forecast and shows the storm brushing the coast of the Central Philippines while delivering hurricane force winds before turning east and heading out toward sea. Meanwhile the EURO is the most aggressive model showing the storm also deliver hurricane force winds to the coast but then moving North and making a powerful landfall on Luzon Island near areas already affected by Typhoon Goni just over 5 months ago. This would have major affects including possibly major hurricane force winds and heavy rain as it shows the stalling there for over 24 hours. The CMC and ICON are the exact opposite and instead shows tropical storm force winds affecting the Central Philippines before the storm curves East and out to sea. Finally, he NAVGEM has a similar solution to that of the EURO but shows an overall weaker system which should be watched closely.

In conclusion, Surigae is expected to be a very powerful typhoon in the coming days. Although the track forecast is uncertain, the intensity forecast is not. Persons along the whole eastern Philippine’s should watch this storm and prepare for potential tropical storm and hurricane impacts. Listen to local weather authorities for the latest details and follow Force 13 and Force 13 Philippines for up-to-date information. Be prepared and most importantly, be safe.