Tropical storm 02B has formed in the Bay of Bengal overnight as it continues to organize 373 miles (600 km) north-northwest of Port Blair (Andaman Islands), 335 miles (540 km) south-southeast of Paradip (Odisha), 404 miles (650 km) south-southeast of Balasore (Odisha) and 391 miles (630 km) south-southeast of Digha (West Bengal). Currently, Force Thirteen have the storm as a 45 mph (72 kph) tropical storm (1-min winds) with a central pressure of 992 Mb, while the India Meteorological  Department currently have the storm as a 35 mph (56 kph) deep depression (3-min winds). The storm is forecasted to quickly intensify as it moves northwestward with Force thirteen forecasting a 1-minute sustained wind speed peak of 105 mph (170 kph), while the IMD forecasting a 3-minute sustained wind speed of 100 mph (160 kph).

The IMD has also put in place several rainfall and wind warning for Odisha, West Bengal and Sikkim for the next few days as can be seen below: 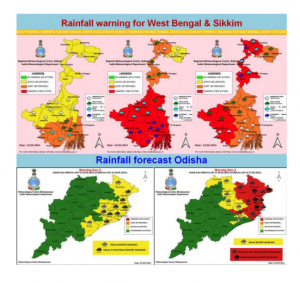 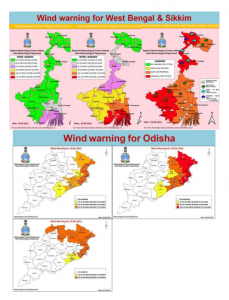 The central Indian government in New Delhi has urged the state and local governments in Odisha and West Bengal to take the necessary step and precautions needed to prepare for the cyclone’s arrival which is currently forecasted to occur in about 2 and a half days at or near peak intensity and strength.

In Odisha, the state’s Energy Minister has directed officials to ensure power supply to hospitals especially oxygen plants throughout the cyclone’s passage, meanwhile the country’s Eastern Railway authorities have suspended 25 trains between May 24 and 29 because of the cyclone’s possible passage across the region between those dates included on the list is the special train number 02279 Pune-Howrah Express departing from Pune on 24th and 25th May and special train number 02280 Howrah-Pune Express departing from Howrah on 25th and 26th May with further info to be given as times goes on.

The Indian armed forces have stepped in to help with the preparations efforts with two columns of the Indian army to be stationed in Odisha and one in West Bengal along with its respective accompanying engineer task force, the  Indian Air Force (IAF) has airlifted 950 National Disaster Response Force (NDRF) personnel and 70 tonnes of load from Jamnagar, Varanasi, Patna and Arakonnam to Kolkata, Bhubaneswar and Port Blair in 15 Transport Aircraft as well as putting 11 transport aircraft and 25 helicopters on standby to carry out humanitarian assistance and disaster relief operations as part of preparations to deal with the arising situation at hand.

The storm’s biggest threat will come from the enormous amount of rainfall that’s to fall on Odisha and West Bengal over the next few days with over 300 mm of rainfall or even more to fall on the region over the next few days which could cause severe flooding and landslides across the entire region, it is then prudent to follow any instructions from officials to take any necessary step to prepare for the storm’s arrival.

Cyclone Yaas: This Train Between Pune And Howrah Cancelled

One thought on “Tropical storm 02B forms in the Bay of Bengal, a major threat to northeastern India.”