Choi-Wan Remains as a Tropical Storm, approaching Taiwan while leaving the Philippines.

By: Kenneth Chan
In: Asia, Pacific Ocean, Typhoon
With: 0 Comments 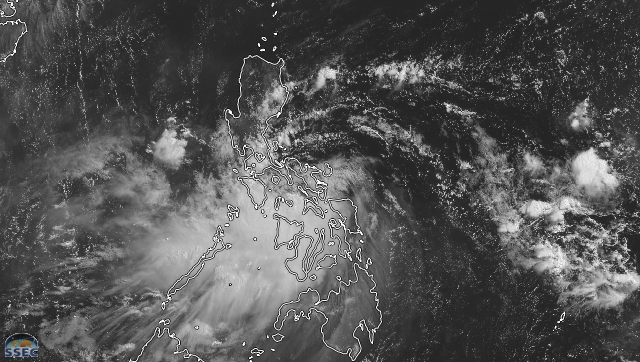 Choi-Wan (PAGASA: Dante) maintained its tropical storm status as it brought torrential rainfall and flash flooding to the Philippines while it brushed the Visayas and Southern Luzon. Currently, it is a 40mph tropical storm by the latest Force Thirteen analysis and is expected to weaken substantially due to persistently high wind shear. It is also moving north to northeastward and approaching Taiwan during the weakening process.
Sea and Land Typhoon Warning is currently in effect in Southern Taiwan while all signal warnings in the Philippines have been lifted.

After leaving the Philippines, the convection reorganized and the center was partially covered by convection again as Choi-Wan is free from land interaction. ASCAT at around 21:00PHT found 40kts winds in the main central convection at the southwest.
In recent imagery, the size of the convection near the center has shrunk significantly although it still successfully generated some central convection as the time approached diurnal maximum (DMAX). The increasing wind shear is because the South Asian high-pressure area, centered at around 25N 110E, is providing at least 25kts of wind shear. In addition, its northward movement is pointing opposite to the northerly shear direction which further increases the effective wind shear. Moreover, due to high wind shear, the convection weakened even though the time approaches the DMAX.

Taiwan: Sea and Land Typhoon Warnings are in effect.
Sea warning areas: Bashi Channel, Pratas, Southeast Taiwan offshore, and Southern Taiwan Strait.
Land warning areas: Hengchun Peninsula, Pingtung County, and Taitung County.
Due to the outer bands of Choi-Wan, there will be stronger winds and waves in Southern Taiwan Strait, Eastern Taiwan offshore, and Bashi Channel today (June 4th).
There will also be stronger winds and swells in coastal areas such as the Hengchun Peninsula, the Southern part of Taiwan (including Lanyu, Green Island), Kinmen, and Matsu Islands. Please stay away from the coast and stop all water activities due to the turbulent sea.
Because of the subsidence current outside Choi-Wan, Taitung and Hualien may suffer from very hot weather (36°C) during daytime today.

Developmental Process Before Leaving the Philippines

The precursor of Choi-Wan, 99W first formed on May 26 and rapidly organized itself in the next three days. It quickly developed into tropical storm 04W on the 29th under a very favorable, low wind shear environment. By our analysis, it peaked at 50mph on the 30th as the wind shear magnitude was still on its side.

Nevertheless, the favorable environment ended on the 31st as wind shear skyrocketed due to the formation of the tropical upper tropospheric trough (TUTT) at the north. Hence the convection was heavily lopsided to the southwest, with the center partially exposed. Choi-Wan approached the Philippines as it had moved west-northwest generally since its formation until landfall. The table below listed the landfalls Choi-Wan has made in the Philippines. Due to land interaction, it kept moving westward and recurved northward in the South China Sea, making the track forecast of HWRF accurate.

Impact on the Philippines

Because of the very intense convection at the southwest quadrant, Choi-Wan brought a significant impact on the Philippines. Mudflow and extensive flash flooding are reported. Over 200mm of rainfall was recorded on the Visayas and Mindoro. 8 people died and 15 are missing during the storm, with over 45,000 people being affected and 3,000 people being displaced, in which 600 of them moved to evacuation centers. The Philippines coast guard is still conducting rescue missions in the Eastern Visayas and Mindanao to search for the missing. All three named storms so far (Dujuan, Surigae, Choi-Wan) have affected the Philippines and all have left considerable impacts on the Philippines to cleanup.

Choi-Wan is going to meet its end soon as the conditions are deteriorating overall. Models agree that the shear will have a temporary drop as it makes its closest approaches towards the South Asian high-pressure area and the main convection of the Meiyu front in Guangdong. Yet afterward, the sea surface temperature will slide down rapidly, and wind shear will skyrocket as Choi-Wan moves to higher latitude and meet the subtropical jet after moving past Southern Taiwan. Local meteorological agencies in the West Pacific also have a consensus that Choi-Wan will degenerate to below tropical depression status after two days as it merges with the Meiyu front and the subtropical jet.

Elsewhere in the tropics, all three systems suffer from high wind shear. Tropical storm Blanca in the East Pacific has weakened into a tropical depression as the low-level center becomes exposed. Invest 90W east of the Philippines and 93S east of Cocos Islands are near its dissipation.