[CURRENT STATUS]
Hurricane Elsa maintained strength as it emerged again into the Atlantic. As per 8 AM EDT advisory of the National Hurricane Center. Elsa was located at 40.2N 73.1W or about 90 miles (140 kilometers) Southwest of Montauk Point, NY with sustain winds of 50 mph, gusting up to 65 mph, minimum central pressure was estimated to be at 1000 millibars. The storm is currently moving Northeast at speed of 31 mph. Latest Force Thirteen fix at 8 AM EDT is in agreement with the NHC on intensity and pressure. F13 had Elsa’s location at 39.8N 73.3W. 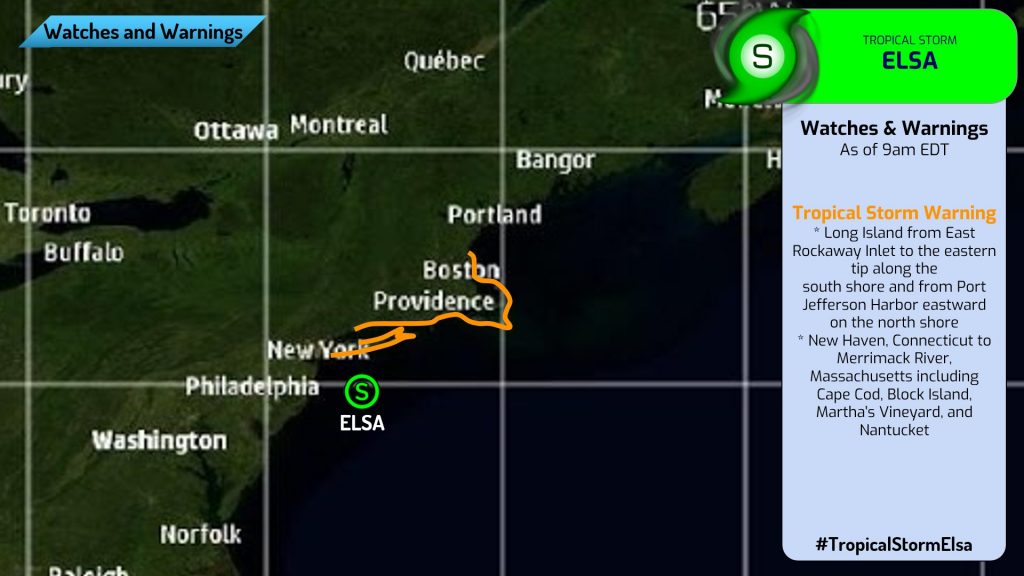 Due to expected heavy rainfall, millions of people are under flash flood watches from the New Jersey to Maine, including New York and Boston. 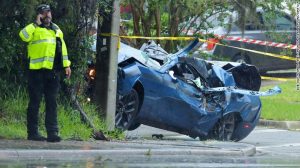 Elsa made landfall on Monday 11 AM along the Gulf Coast in Taylor County, Florida. In Jacksonville, winds from Elsa caused a tree to fall on two cars during an afternoon commute, killing one person, according to Capt. Eric Prosswimmer with the Jacksonville Fire and Rescue Department. Florida Gov. Ron DeSantis addressed the death. “We’re obviously very, very sad to see that,” he said. Gov. Ron DeSantis also said Elsa left “minimal impact” across the state during a Thursday news conference in Surfside.

Nine people were injured Wednesday evening in coastal Camden county, Georgia, when a tornado struck a campground for active-duty service members and military retirees. The tornado flipped over multiple RVs, throwing one of the overturned vehicles about 200 feet (61 meters) into a lake, the National Weather Service said.

In South Carolina, a coast guard air station crew rescued a family that became stranded on Otter Islands on Wednesday after their boat drifted off the beach due to Elsa. A man, his wife, his daughter, and three cousins were hoisted into a helicopter and taken to Charleston executive airport in good health Wednesday night, the coast guard said in a news release.

New York City subway stations were inundated by water due to heavy rainstorms ahead of Elsa. Videos posted to social media showed people wading through a flooded station in northern Manhattan, while in a downtown station water appeared to pour from the ceiling, and a station in the Bronx saw water cascading down the stairs.

Scattered power outages were being reported along Elsa’s path Thursday afternoon, with about 26,000 homes and businesses without electricity from Florida to Virginia, according to the website poweroutages.us.

Three tornadoes occurred in Florida on Wednesday afternoon, one being an EF-2 tornado. It travelled 3.65 miles and injured 17 people. An EF-1 tornado also occurred in Effingham County, Georgia that travelled about 2 miles but did not create any damage. 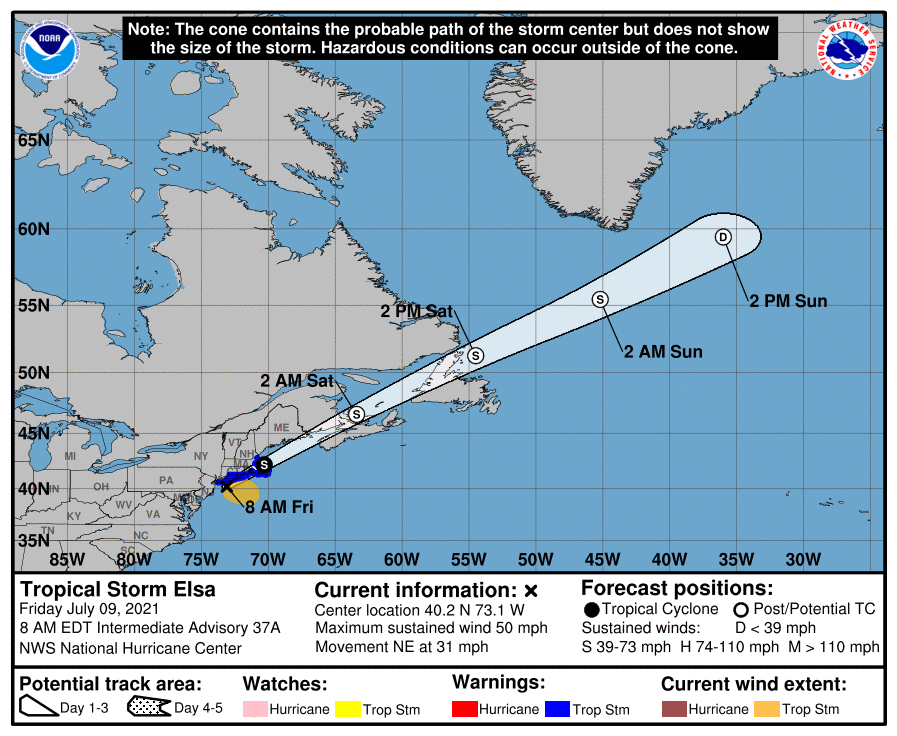 WIND: Tropical storm conditions are expected to continue along the mid-Atlantic coast early this morning. These winds will spread northward in the warning area over the northeastern states from late this morning into the afternoon.

RAINFALL: Across northern New Jersey, Long Island, and southern and coastal New England…2 to 4 inches of rain with isolated totals up to 6 inches are possible through Friday, which could result in considerable flash and urban flooding. Isolated minor river flooding is also expected.