The death toll from the devastating flooding due to torrential rainfalls across parts of Western Germany and Belgium rose to above 100 on Friday. On the latest tally, 93 had died in Germany, on which 50 people had died in the German state of Rhineland-Palatinate, and another 30 in neighboring North Rhine-Westphalia state, but warned that the figure could rise further. In a provisional tally, the Belgian death toll has risen to 12, with 5 people still missing, local authorities and media reported early Friday. Search operations for people still unaccounted, with some 1,300 in Germany were still reported missing. Authorities said efforts could be hampered by disrupted roads and phone connections.

Widespread swaths of these states saw 24-hour rainfall totals between 100 and 150 millimeters (3.9-5.9 inches), which represent more than a month’s worth of rainfall in this region. Cologne recorded 154 millimeters (6 inches) of rainfall in only 24 hours ending Thursday morning, which is nearly double its monthly average for July of 87 millimeters (3.45 inches). Locally heavy downpours resulted in extreme flash flooding. In Reifferscheid, an incredible 207 millimeters (8.1 inches) of rain fell in only nine hours, according to the European Severe Weather Database. 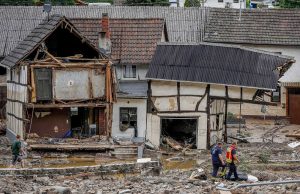 Shipping was suspended on the River Rhine, one of Germany’s longest and most important arteries of industrial transport. In the village of Schuld and elsewhere, houses were swept away after rivers burst their banks following days of extreme rainfall. A residential area in the city of Wangen im Allgäu in the German state of Baden-Württemberg suffered severe flooding late Thursday evening. The banks of a nearby river had burst, causing the district to flood. According to the emergency services, the water had infiltrated into several cellars as well as garages. A dam in the Eifel district has overflown. The 77.2-meter-high (253 feet) Rur Dam has been overflown, meaning there could be worse flooding further along the Rur river (separate from the more northern Ruhr River). Villages near the dam have already been evacuated, but the warning has now been extended along the river to towns including Heimbach, Nideggen, Düren, Jülich, Linnich, Kreuzau, Hürtgenwald and Niederzier. The power company has warned it may switch off the power as a precaution. The dam was built in the 1930s and extended in the late 1950s.

FRANCE: The Aire River rose to its highest levels in 30 years in some areas, according to the L’Est Republicain newspaper. In northeastern France, heavy rains flooded vegetable fields, many homes, and a World War I museum in Romagne-sous-Montfaucon. The equivalent of two months of rain has fallen over two days, according to the French national weather service, with flood warnings issued for 10 regions. No injuries or deaths have been reported, but forecasters warned of mudslides and more rain on Friday. 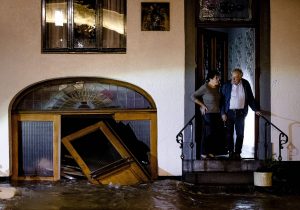 Authorities in the southern Dutch town of Valkenburg, close to the German and Belgian borders, evacuated a care home and a hospice overnight amid flooding that turned the tourist town’s main street into a river, Dutch media reported. Dutch city calls for two neighborhoods with a population of more than 9,000 to evacuate. The city of Maastricht in the Netherlands has called on residents of the Heugem and Randwyck districts to leave their homes “as soon as possible” due to rising water in the river Meuse. “The water in the Meuse is rising rapidly. We expect it to cross the quays at Randwyck/Heugem around 3 AM,” a news release from the city council of Maastricht said. “This means water will end up in the streets and homes.”

BELGIUM: The floods have also disrupted Belgium’s national railway network, Infrabel, which their service has been stopped. The Vesdre River spilled over its banks and sent water churning through the streets of Pepinster, near Liege, where a rescue operation by firefighters went wrong when a small boat capsized and three elderly people disappeared. “Unfortunately, they were quickly engulfed,” said Mayor Philippe Godin. “I fear they are dead.” In Verviers, the prosecutor’s office said several bodies had been found but could not confirm local media reports that four people were killed there. The Meuse River overflowed its banks on Thursday, thus the mayor of Liege asked people living nearby to move to higher ground.

SWITZERLAND: Heavy rainfalls have saturated the soil and caused landslides and mudslides. Authorities in Geneva recommend not to walk along rivers and not to go down the Rhône due to overflow. The level of Lake Geneva is also a concern to the authorities. The risk of flooding is high on the shores of Lake Zurich and the Limmat River, so authorities have also urged people not to go to forests for safety reasons after violent storms and gusts of winds exceeding 100 km/h fell trees down. Lake Lucerne, in central Switzerland, also poses a very high risk of flooding, warned MeteoSchweiz, while the lakes of Thun, Biel, the Upper Rhine, and the Reuss River are at high risk.

Weather service spokesman Friedrich said the downpours were caused by cooler and warmer rainfall mixing. “It came from France at the beginning of the week to Germany and has been sitting over Germany for the last 48 hours,” he said. “For now we predict the worst of the torrential rainfall is over, though more heavy rain is due in southwestern Germany on the upper reaches of the Rhine, (Thursday) and Friday,” he added. MeteoFrance said that up to 90 mm of rain could fall over these areas, which represents three weeks to a month of rain. It stressed that up to 70mm of rain have already fallen over the large swathes of the northeast since Tuesday and that “the soils are already saturated with water and mudflows possible in sloping areas.”

Some European leaders are devastated by the floods. German Chancellor Angela Merkel, who is on her swansong visit to Washington, DC, described the deadly floods as a “catastrophe.” “My thoughts are also always with the people in our homeland … Peaceful places are going through a catastrophe in these hours, one can say a tragedy. Heavy rainfall and floods are very inadequate words to describe this — it is therefore really a catastrophe.”, she added. Merkel said the focus is on the rescue and immediate response to those affected by the floods. But added that she was in close contact with her country’s finance minister, Olaf Scholz, to work on a strategy for longer-term financial aid to help with recovery. The governor of Rhineland-Palatinate state, Malu Dreyer, told the regional parliament on Thursday that “We have never seen such a disaster. It’s really devastating.” The German military – the Bundeswehr – will focus most of its attention on the flood-response efforts, the defense minister has said. Annegret Kramp-Karrenbauer said on Friday: “I have already ordered that all other assignments that are not directly related to the missions abroad be put on hold. “The Bundeswehr is already providing active help with emergency response and clearing work with its quickly available on-site forces.”

King Philippe of Belgium visited the town of Chaudfontaine, in the province of Liège, after it was hit by severe flooding. “Our thoughts go to the victims, their families, and all the people who had to be evacuated in an emergency from disaster areas.”, the King said in a statement.

Italy has begun sending search crews and vehicles to Wallonia, the Italian Civil Protection agency said in a statement. Workers from France’s Civil Protection Agency arrived in the Belgium province of Liege to assist with recovery and rescue efforts. “Rescuers from the instruction and intervention unit of the (French) Civil Protection carry out the first reconnaissance operations … They will be joined this evening by firefighters, divers, and lifeguards,” the French Civil Protection agency said in a post on Twitter. European Commission Chief Ursula von der Leyen wrote on Twitter on Thursday morning that the bloc “is ready to help” and that countries impacted by the floods can call on the EU Civil Protection Mechanism. The EU also activated the civil emergency response mechanism to help areas of Belgium affected by floods, the EU Commission said Thursday in a statement. “Belgium, Luxembourg, Netherlands, Germany you can count on the EU’s help to face these dramatic floods. My thoughts are with the victims of these tragic events and with all who will have to rebuild what they have lost. I want to thank all rescue teams for their invaluable help and relentless efforts,” EU Council President Charles Michel tweeted Thursday.

UK Prime Minister Boris Johnson tweeted an offer of support on Thursday. “Shocking to see the devastating flooding across Germany, Luxembourg, the Netherlands, and Belgium,” Johnson tweeted.”My thoughts are with the families of the victims and all those affected. The UK is ready to provide any support needed in the rescue and recovery effort.” The Dutch government sent some 70 troops to the southern province of Limburg late Wednesday to help with tasks including transporting evacuees and filling sandbags as rivers burst their banks. There were no reports of injuries linked to flooding in the Netherlands. Authorities in the city were officially declared as a disaster zone by the government under article 1 of water management and safety regions.