Super Typhoon Chanthu explosively intensified on Tuesday from a weak tropical disturbance into a powerful Category 5 Super Typhoon with winds of 160mph (140kts) and a pressure of 921mb via unofficial Force Thirteen analysis Thursday morning. Chanthu was located at 15.4°N 128.0°E, or to the Northeast of the main Philippine island of Luzon. Heavy rains associated with the typhoon may begin affecting the eastern section of Northern Luzon on Friday. There is a high likelihood of hoisting TCWS over Extreme Northern Luzon. Some areas can be under warning signals are early as tonight or early tomorrow morning. Although Chanthu is not expected to deliver a Philippine landfall, Taiwan remains in the potential path as the storm continues to barrel towards the island over the coming days where it could make an intense landfall.

As early as tomorrow, the northern and eastern seaboards of Northern Luzon will experience rough seas. Sea conditions over the waters in the northern provinces of the country will likely be risky for all types of seacrafts in the coming days. Sea travel is risky for all types of seacrafts over these waters. Mariners without the proper experience should immediately seek safe harbor.

Chanthu (PAGASA Name: Kiko) is forecast to move westward-southwestward in the next 12 hours before turning west-northwestward until Friday making close approach over the northeastern section of mainland Cagayan before heading towards the vicinity of Extreme Northern Luzon. Afterwards, the typhoon will turn generally north-northwestward and pass near the southern coast of Taiwan on Saturday before making landfall in the vicinity of southeastern China on Sunday evening or Monday morning. Due to favorable environmental conditions, Chanthu (Kiko) is expected to continuously intensify until Saturday. Some weakening and restrengthening of the storm is expected as eyewall replacement cycle can happen before its approach to Luzon Strait.

Tropical Storm Conson (PAGASA name: Jolina) maintained intensity as it emerged over the West Philippine Sea. Tropical Cyclone Wind Signals are hoisted in a large area of Luzon. As per the latest JTWC analysis, Conson was last located at 15.6°N 117.7°E, about 230 kilometers WNW of Manila with 1-minute maximum sustained winds of 95 kph (55 mph) and a minimum central pressure of 993 millibars. Force Thirteen analysis on Conson was similar to official estimates. Conson is forecast to emerge over the West Philippine Sea tonight or tomorrow early morning. Re-intensification is forecast to occur beginning tomorrow evening as the tropical cyclone moves generally westward over the West Philippine Sea towards the southern China-northern Vietnam area possibly as a 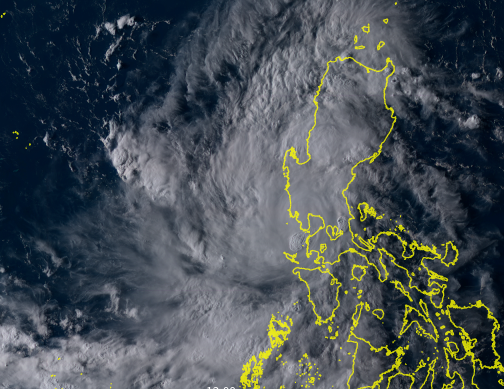 (All Warnings are for Tropical Storm Conson.)

Hazards that Conson will bring:

Heavy to intense rainfall will be experienced on Western portions of Central Luzon to the Mindoro Island. Moderate to heavy rains will be experienced over the rest of Central Luzon and CALABARZON. Light to moderate rains expected to the rest of mainland Luzon excluding Bicol Region. Scattered to widespread flooding (including flash floods) and rain-induced landslides are highly likely especially in areas that are highly or very highly susceptible to these hazards as identified in hazard maps.

Tropical Storm-force winds will bring light to moderate damage to structures and vegetation in areas under warning signals.