Intense Tropical Cyclone Batsirai maintained strength on Wednesday as it passed north of the Southern Mascarene Islands of Mauritus and Réunion. On the latest Meteo France bulletin, the storm packed 10-minute winds of 195 kph (120 mph,) and maximum gusts of 280 kph (175mph.) A minimum central pressure of 935 hPa was recorded at the center of the storm as well. The storm is moving west-southwest at speed of 17 kph (10 mph.) Force Thirteen’s CDPS scale is currently marking Batsirai as CDPS Stage 7, as the storm is expected to bring catastrophic damage to Madagascar on its landfall later this week. 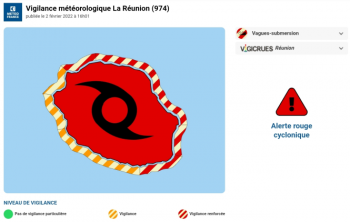 Left: Reunion island is currently under a red cyclone warning, as the storm could pose significant threats to the island.

Airports in Réunion and Mauritius have also been closed due to the cyclone. Meteo France also warning residents that gusts could reach 100/110 km/h on the coast and 120 km/h in the highlands. Rains concern the department the most, especially to the south of the island. Most wind effects to the island would be on the northern portion. They also warned the residents that the condition will continue to deteriorate on Thursday as the storm passes near the island.

Authorities and residents of Madagascar are still dealing with damage from Tropical Storm Ana that caused dozens of deaths last month. The steep, rugged mountains along Madagascar’s eastern coastline will increase the risk of increased rainfall as well as flash floods and mudslides. Forecasts show swells as high as 10 meters across Eastern Madagascar on landfall.

Southern Africa has anguished memories of the 2019 Cyclone Idai, which left a trail of destruction and deaths in Mozambique, Zimbabwe and Malawi.

Force Thirteen will continue to cover Batsirai as it moves closer to Madagascar, as well as covering the impacts that occur on Reunion and Mauritius. You can follow for more updates on our Twitter and Facebook pages, as well as by subscribing to our Youtube channel using the embedded links, with live coverage beginning at the 16z hour.

One thought on “Batsirai Marches Towards Madagascar, Cyclone Warnings in Effect for Reunion”